30 of the Best Football Teams Ever

In an effort to rank greatness and bring clarity to your conversations, 90min has put together a list of the 30 greatest football teams of all-time. We kick off this list with an unconventional entry - unconventional in the sense that this Liverpool squad, for all its dazzling brilliance, hasn't actually won any league silverware. Yet.

This current Reds side remain undefeated through a remarkable 40 league games, exuding efficiency and class of the highest order, also winning the European Cup for the sixth time with a Premier League crown pretty certain to follow.

Think of this pick like a Pink Floyd album. It goes down as an extreme success with many despite nobody being overly familiar with it, but the masses pretend to be experts on the subject when it comes up in conversation.

And, like a Pink Floyd album - their music does make some sense, I promise - this Maccabi Haifa season deserves to be praised, as they went 39 games unbeaten en route to winning a domestic treble. Captained by the legendary Zico, Flamengo enjoyed one of Brazilian football's most memorable seasons of all time.

Epitomising the ethos of Joga Bonito, this star-studded team won three trophies in the space of 21 days: a Campeonato Carioca, Copa Libertadores and the Intercontinental Cup with a famous 3-0 victory over European champions Liverpool. Crowned world champions after a memorable final at the Olympiastadion, West Germany became the first European champions to win the World Cup thanks to a second-half winner from the great Gerd Muller. This iconic side were not only successful in winning the Jules Rimet trophy, but also in building up the expectation of every English football fan ever since. Given the aforementioned brilliance of Liverpool this season, it's easy to forget how good Manchester City were in 2018/19.

The first men's team to win a domestic treble in England, the Citizens were also the first side to surpass 100 points in the Premier League. As if that wasn't impressive enough, they also thumped Watford 6-0 in the FA Cup final. Ruthless. One of the best Barcelona sides of all time, a team featuring the likes of Hristo Stoichkov and Ronald Koeman will be most fondly remembered for bringing the Blaugrana their first European Cup.

They also won La Liga on the final day of the season when Real Madrid suffered a shock 3-0 loss to Tenerife, completing a remarkable double for the men from Camp Nou. Arguably the greatest underdog story in sports, Leicester shocked the world when they were crowned Premier League champions in 2016, barely a year after avoiding relegation.

Lethal on the counter, an unfancied Foxes outfit were spearheaded by Jamie Vardy, who scored for a record-equalling 11 Premier League games in a row to create a fairy tale story none of us will ever forget. Led by the pioneering of Helenio Herrera, this Grande Inter side of the 1960s were one of the first to have success with a 5-3-2 system, comprising of clinical counter-attacks often led by the captain Armando Picchi.

Treble winners in 1965, Inter lost only twice in Serie A all season to win the title before Zair scored the only goal over a Eusebio-led Benfica in the European Cup final. 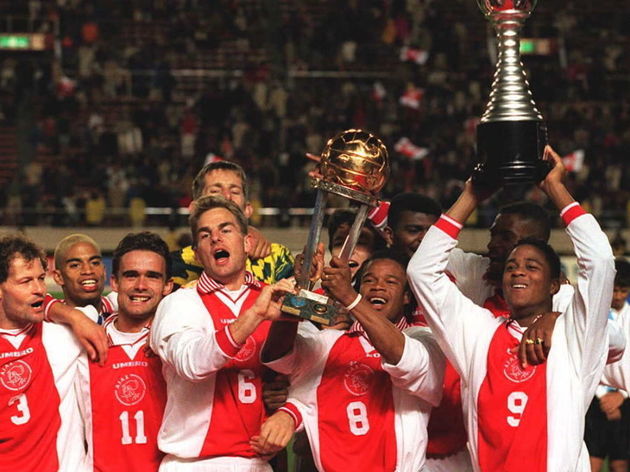 This Ajax side were so dominant throughout the year of 1995 that they went 12 months without losing a single game.

Winners of the Eredivisie and the European Cup, the men from Amsterdam went an unbelievable 48 games unbeaten, creating a piece of footballing history. ​​Left in disarray followed by the infamous Calciopoli scandal of 2006 and subsequent relegation to Serie B, Juventus went from zeroes to heroes in 2011/12.

They went the entire season unbeaten thanks to an impenetrable defence that conceded only 20 goals in 38 games. Much like a Suggs-led single, Spurs' season was brilliantly chaotic. Scoring an astonishing 115 goals in 42 games on a charge to the title, Tottenham became the first team of the 20th century to win a coveted double. It is quite astonishing, almost 25 years later, to think that Paul Lambert lined up against Antonio Conte in a Champions League final.

Bringing an inaugural European crown to Dortmund in 1997 is a feat that seems all the more impressive ​when their opponents in the final Juventus had the likes of Zinedine Zidane, Didier Deschamps and Christian Vieri. This side was vintage José Mourinho. No bus parking, no nonsense, just an iron curtain of a defence that helped

Spearheaded by the now iconic duo of John Terry and Frank Lampard, credit must also go to Claude Makélélé for being the first player in the Premier League era to demonstrate the importance of the holding midfielder. Returning to Camp Nou as manager, Pep Guardiola's blueprint for modern football was stamped with a historic treble in 2008/09.

Glimpses of Guardiola's eye-catching, aesthetically wonderful tiki-taka philosophy were a reminder that football is, and always will be, the beautiful game. Ridiculously, he managed to do so just a year later, leading the Gunners to a title that they sealed at White Hart Lane, ending the campaign as without defeat with a 2-1 at home to Leicester on the final day. This Brazil team was an example of absolute perfection that ticks every box to such an extent that you cannot stop watching them.

So good that you cannot stop yourself gushing about it at every opportunity. Celtic became the first British team to conquer Europe as a result, but what makes the feat all the more admirable is the fact that 14 of the 15 squad members were born within a 10-mile radius of Celtic Park. Local legends. Containing greatness from back to front with the likes of Graeme Souness, Alan Hansen, Ian Rush and Kenny Dalglish, Liverpool were gladiatorial in their conquering of Rome, silencing the Stadio Olimpico by beating home side Roma 4-2 on penalties to win a fourth 'Big Ears' trophy. ​Spearheaded in attack by the great Gerd Muller, Bayern secured a historic double in the 1968/69 season thanks to 30 goals from their talismanic striker.

This will undoubtedly go down as one of the great German teams, what could have been if the Bavarians were competitors in Europe that year? ​Led by the great Eusebio, the only player to win a Ballon d'Or for a Portuguese club - doing so in 1965 - Benfica enjoyed one of the best decades in football. However, he went through a purple patch in his early years of management, going 58 games unbeaten with Milan. Beat that, Liverpool. Oh, and Capello also took Milan to three successive Champions League finals. Go on Liverpool, try and beat that. The 2010 was one of the ugliest in recent memory, with 14 yellow cards and a kung-fu kick from Nigel de Jong on Xabi Alonso that Bruce Lee would be proud of. The most blatant red card never given. ​Not only did this Ajax outfit have a great team on paper, being led by Johan Cruyff, but they have the trophies to show for it, sweeping all before them to win the treble in 1971/72.

Ajax lost just one game all season, going undefeated at their former home, the De Meer Stadion, throughout the entire campaign. The fact that this Milan team is higher up on this list than one ​that went 58 games unbeaten is testament to the everlasting genius of Arrigo Sacchi.

One of the best implementers of Total Football to grace the game, Sacchi created a staunch defence with a back four of Paolo Maldini, Franco Baresi, Mauro Tassotti and Alessandro Costacurta that led Milan to successive European crowns. Back to Forest, their achievements are now easily forgotten for a club stuck in the Championship, but they won the First Division in 1977/78 just a year after being promoted before their infamous run​ to becoming Kings of Europe with victory over Malmo in 1979. The Magnificent Magyars were ahead of its time in so many facets. The first sweeper-keeper in ​Gyula Grosics, the first team to popularise the now-universal concept of Total Football and the first team to have sustained success with a false-9 centre-forward.

It's no wonder therefore, that this side lost once in 50 matches over a six-year spell, including the 'Match of the Century' that saw them defeat England 6-3 at Wembley with a hat-trick from Nándor Hidegkuti. Another team that were revolutionaries from a tactical perspective, the Os Santásticos won an unmatched 25 titles between 1959-74, including two Copa Libertadores.

This included the first-ever treble in world football in 1962, Pélé's 1,0000th goal in 1969 as well as, oddly, a 48-hour ceasefire in the 1967 Nigerian Civil War so that the two factions could watch Pélé take part in an exhibition match in Lagos. From the first treble winners to the only European treble ​winners in English football, this Manchester United team accomplished a feat that may never be repeated.

Featuring arguably the single-greatest group of academy graduates, the Class of '92 were influential in snatching victory in the final seconds in Barcelona. Ole Gunnar Solskjaer brought United to the top of the world in 1999, a position they could not seem further from in 2020. Before any reader gets hot under the collar about this team being the number one choice on the list, just remember that Alfredo Di Stefano's Madrid won the European Cup five times in six seasons.

This group of players paved the way for football's biggest club, Real Madrid, to sign the best players, the 'Galacticos', and build the 'Yé-yé' team that conquered Spanish football throughout the 1960s, so-called because of the refrain in The Beatles' 'She Loves You'.

An ode to Di Stefano and Madrid: 'with as many cups as that, you know you should be glad'.