5 Great Players Who Had 1 Glaring Weakness in Their Game

Every player has certain flaws but a lot of the game's greats might only slightly dip from their normal calibre in several areas, while never clearly being bad at one in particular.

But then there are some whose illusion of perfection is shattered when an uncharacteristically lacking aspect of their game is highlighted. Like a child missing the day of school when telling the time was taught and breaking out into a cold sweat whenever faced with an analogue clock.

Despite these players' unquestionable status as fantastic footballers, it's both odd and reassuring that even those who can make the game look so effortless do have one glaring flaw. A scorer of great goals? Unquestionably. A great goalscorer? Of course. Any good with his head? Err...

Of Thierry Henry's 175 ​Premier League goals just six were headers. And while he notably scored a 94th minute winner  against Manchester United in 2007 with his head, the fact that this moment stands out is because seeing Henry convert a header was such a rare occurrence.

In fact, earlier in that same match the Frenchman had delivered a much more familiar outcome when tasked with heading the ball goalward. Namely, limply nodding it directly into the keeper's hands as his 33rd minute effort barely forced Edwin van der Sar into a dive.

When you're a player so elegant and graceful that you can pull off a catchphrase as laughable as 'va va voom', being below average at heading hardly undermines what was a stellar career. Higuaín suffers a reputation unbefitting of a striker who has averaged roughly a goal every other game across Argentina, Spain and Italy (let's brush that misadventure at Chelsea under the carpet).

Unfortunately, the man who opponents (and sometimes brutal home fans) cruelly taunt with the moniker 'Piguaín', is perhaps most closely associated with occasions in which he fails to find the net.

While the Argentinian can point to goals in the Spanish and Italian Super Cups (which are technically finals but other than José Mourinho, who counts those?) ​Higuaín has mustered a trio of utterly woeful performances in showpiece matches for his national side.

In the space of two years Argentina reached the final of the World Cup and two editions of the Copa América. Higuaín not only failed to score in each but missed presentable opportunities he may have converted on a lesser stage and a penalty in the shoot-out of the 2015 continental competition. 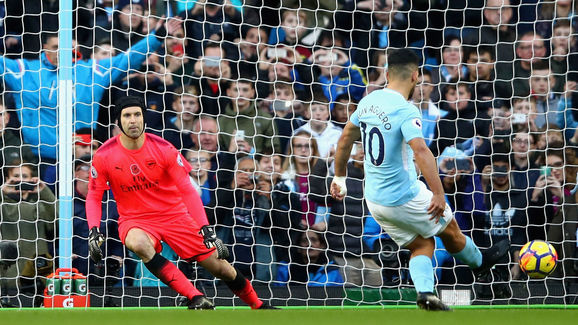 One of the ​greatest goalkeepers of the modern era made countless, miraculous saves from point-blank range but was surprisingly poor when facing efforts from 12 yards.

Yet, incredibly, on his ​ice hockey debut, one of the more interesting post-football careers, Čech saved not one but two penalties to win the match. There are several misconceptions surrounding Paul Scholes' playing career: the notion that he was exclusively shunted out on the left for England or that he

However, the idea that his tackling was anything but wretched has not been misconstrued by the fog of time, even if the man himself likes to propagate that narrative.

Former teammate Ole Gunnar Solskjaer summed up the contrast of Scholes' game neatly when he ​said: “He's not the quickest, he doesn't run the most, he never wins a header, he can't tackle but he's the best player.” While Gerrard could be relied upon to produce innumerable moments of brilliance to often drag Liverpool kicking and screaming to success, you couldn't guarantee he'd follow any tactical instructions.

Gerrard enjoyed his most successful period at ​Liverpool under Rafa Benítez. A manager whose approach