5 things we learned from the Premier League this weekend 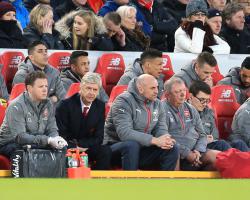 Here, Press Association Sport looks at five things we learned from the latest round of fixtures.

Arsene Wenger described himself as "strong enough and lucid enough" to objectively judge the merits of dropping his top-scorer and best player, Alexis Sanchez, at Anfield

Liverpool were 2-0 up by the time he corrected his mistake at half-time and he immediately got the Gunners back up and running, albeit en route to a 3-1 defeat

The future of both men at the club is in doubt and events this week have muddied the waters yet further.

The Foxes coach has been cast as a modern day Brutus with Ranieri in the role of another unceremoniously toppled Roman, Julius Caesar

But a second victory in a row, this time over relegation rivals Hull, means he is off to a rollicking start in the top job

The fact referee Anthony Taylor hit Marbella for a stag party last week, attended by fellow official Kevin Friend, has received plenty of attention after both men turned in less-than-optimal performances this weekend

Taylor awarded Burnley a penalty for a handball committed by their own player, Sam Vokes, while Friend failed to punish ugly incidents involving Zlatan Ibrahimovic and Tyrone Mings as well as seemingly forgetting he had booked Andrew Surman twice

The case for video assisted decisions and the folly of violent acts on the pitch will linger on, a pre-wedding party will not.

The bottom three could be settled

Now it seems like those who currently occupy the drop slots - Sunderland, Hull and Middlesbrough - could easily stay there

Bournemouth picked up a precious, battling point at Manchester United, Leicester and Crystal Palace appear to have woken from a slumber and Swansea are in rich form under Paul Clement

After reeling off three hat-tricks in nine matches he went up against the Premier League's other in-form marksman, Everton's Romelu Lukaku, and bagged two more to go clear as the division's top scorer

The sky is the limit