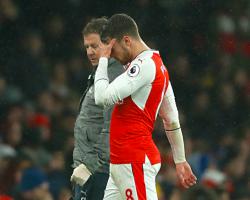 The Gunners travel across London to face the Premier League leaders knowing a loss would all-but kill off any lingering title ambitions following Tuesday's shock home defeat to Watford.

Wenger, who will serve the third of his four-match touchline ban against the Blues, saw his side well beaten by the spirited Hornets and they now sit nine points adrift of Chelsea in third place.

Ramsey, who inadvertently deflected Younes Kaboul's strike past Petr Cech to put the visitors ahead, was forced off with less than a quarter of the game gone as another injury struck the Wales international.

"It's a calf strain," Wenger confirmed after the game.

"I don't know how long he will be out for, but it's a calf strain."

The 26-year-old sat out 13 games at the start of the campaign having suffered a hamstring injury in the opening weekend defeat to Liverpool.

Now he is set for another spell on the sidelines at a crunch time of the season for Wenger and his players.

The Watford defeat once again raised questions of Arsenal's title credentials and comes ahead of a hugely important trip to face rivals Chelsea and with the first leg of their Champions League round-of-16 clash with Bayern Munich on the horizon.

Ramsey was operating in a deep role against Watford, not his preferred position of the number 10 spot, but his absence could be felt at Stamford Bridge.

With Granit Xhaka serving a ban for his second red card of the season, Mohamed Elneny in the final of the African Cup of Nations with Egypt, Jack Wilshere on loan at Bournemouth and Santi Cazorla and now Ramsey both injured, Wenger's options are limited.

Francis Coquelin will surely start in his most natural role but there is no obvious partner for the Frenchman, with Alex Oxlade-Chamberlain having played in Ramsey's place after replacing him against Watford.

Wenger could opt to start with the England man or turn to youngster Ainsley Maitland-Niles, who impressed there in the recent 5-0 FA Cup win over Southampton but has never started a Premier League game.

There is scope for the likes of Rob Holding or Gabriel to move forward out of the defence to act as a shield, but whatever solution Wenger opts for it is likely to be severely tested by Antonio Conte's men.