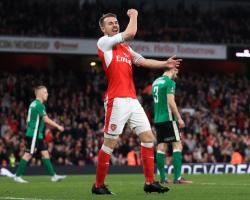 The Gunners eased to a 5-0 win against the non-league outfit after losing to both Liverpool and Bayern Munich in the preceding week, leading to their elimination from the Champions League and dropping severely off the pace in the Premier League title race.

Manager Arsene Wenger had seen his side lose five of their seven games in all competitions leading up to the visit of Lincoln.

The 12-time FA Cup winners started slowly but took the lead on the stroke of half-time through Theo Walcott before Olivier Giroud, a Luke Waterfall own goal, an Alexis Sanchez strike and Ramsey's second of the season wrapped up a comfortable win.

And the Wales international believes a Wembley semi-final can prove an uplift for Arsenal.

"Of course it's a big boost," Ramsey told Arsenal Player.

"We're disappointed to be out of the Champions League but I love this competition.

We're just delighted that we've got another trip to Wembley."

Ramsey also paid tribute to Lincoln, who held their own for the opening 45 minutes before tiring towards the end of the tie.

"Full credit to Lincoln," he said.

They showed that in the first half, they were difficult to break down - very well-organised - and it's no surprise that they're top of their league."

The Imps had already beaten Championship pair Ipswich and Brighton before winning at Premier League Burnley to set up the trip to the Emirates Stadium.

Despite the defeat in north London, forward Nathan Arnold believes Danny Cowley's side can take plenty from their performance.

"Ultimately we're disappointed we've conceded five goals, but if you look at the calibre of player we have come up against, you can't argue with the scoreline.

They then took advantage of that space to hurt us and showed the gulf in class.

"However, we can take a lot of credit from that first half

We went in at 1-0 down after they scored at a crucial time without playing very well or creating any clear chances, which is disappointing.

"We were well in the game for 30 or 40 minutes but it was probably always going to be the hardest game of our lives."