Ryan Giggs has confirmed that midfielder Aaron Ramsey has withdrawn from the Wales squad due to injury and has returned to Arsenal for treatment.

Ramsey was not involved as Wales recorded a 1-0 win over Trinidad and Tobago on Wednesday, in which Ryan Giggs fielded an experimental side.

Ryan Giggs has confirmed that @aaronramsey has withdrawn from the @Cymru squad through injury and has returned to @Arsenal for treatment.

Wales' ​official Twitter account has now confirmed that ​Ramsey has been withdrawn from the squad through injury and will now return to ​Arsenal for assessment, though the exact nature of the problem has not yet been clarified.

Regarding the situation, head coach Ryan Giggs said: "There's a Plan B, we've been working for that."

The 28-year-old, who will join ​Juventus in the summer, will now miss Sunday's European qualifier against Slovakia, in what is a considerable blow to Giggs ahead of his side's return to competitive action.

 In response, Giggs has told the media: "There's a Plan B, we've been working on that." #SVKWAL

In the longer-term, the midfielder's setback may also prove problematic for Arsenal. Unai Emery's squad are currently away on a warm weather training camp in Dubai during the international break, and news of Ramsey's injury will come as a concern to the Gunners.

Arsenal had entered the break with only Hector Bellerin, Rob Holding and Danny Welbeck remaining as long-term absentees, with Emery's squad boasting an otherwise full bill of health ahead of the run-in to the end of the season.

Ramsey had played a key role in the Gunners' recent wins over ​Manchester United and Rennes, having started in each of the decisive encounters, and has continued to prove a man for the big occasion for Emery. 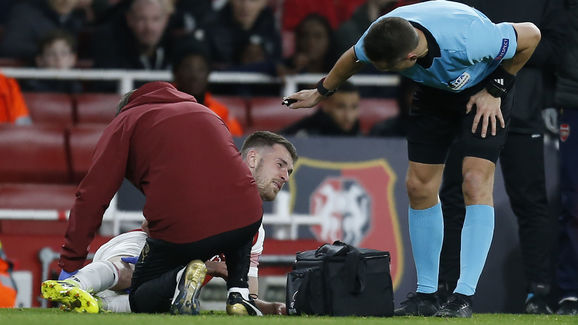 The Welshman's latest injury problem will no doubt alter the Arsenal head coach's thinking during the break and may well require a change in system for the Gunners to accommodate the loss of Ramsey, though there is not yet any suggestion of the extent of the injury.