Akpom ready to step up for Arsenal 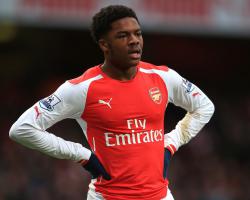 The Gunners have been linked with a host of big-name strikers from across Europe as many believe Wenger needs to bring in a top-class finisher to turn Arsenal into bonafide Premier League contenders.

Ahead of the weekend's Emirates Cup success, which included a 6-0 thrashing of Lyon and a 1-0 win over Wolfsburg, Wenger said he felt there were enough goals in his side and challenged the current crop to add 10 more to the 71 scored in the league last year.

Akpom, meanwhile, is ready to step up to the mark in the coming season - starting with Sunday's Community Shield clash with reigning champions Chelsea.

"It's really good preparation," the 19-year-old said of the Emirates Cup double-header.

"The experience for me and the other young players to get minutes and show people what we can do - we are all excited about the game at the weekend now.

"It's nice to see the young players doing well and the boss says he will always give opportunities to young players who are doing their job.

"The main thing for me is for a manger to have confidence and faith in me so for the manager to say that he isn't after another striker is good.

"But the hard work doesn't stop there it means you have to maintain a place and there are a lot of good strikers and goals in the team so hopefully his season I can give it my all and be involved in the team."

Akpom, who has yet to score a competitive senior goal for the Gunners, was arguably overshadowed by the likes of fellow teenage pair Alex Iwobi and Jeff Reine-Adelaide during the Emirates Cup.

Wenger is keen to keep that pair on board for the season but has hinted Akpom, who has already spent time away from the club at Brentford, Coventry and Nottingham Forest, could again be loaned out in a bid to gain more experience.

The chances are it would be to a fellow Premier League club on this occasion - but the England Under-20 international insists he would rather compete with the likes of Walcott, Olivier Giroud and Danny Welbeck for a spot in Wenger's side.

"I would rather stay here and fight for a place and give it my all and compete with the other strikers," he added.

"There is a lot of talent in the team but I think I am capable of competing and getting a place in the team, it's all down to hard work.

"The boss really likes playing young players when he can and that motivates the young players because it shows them that they have a chance.

"This season I think everyone will say there is good team spirit and cohesion since we went on tour and now so the team is looking strong and I think we have a chance of a major trophy.

There are a lot of young players coming through and everyone will be familiar with how players play and that can only make players stronger."