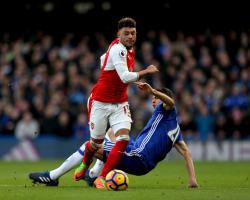 The Gunners were well-beaten 3-1 at Stamford Bridge on Saturday lunchtime and are now 12 points adrift of the table-topping Blues.

Having lost at home to Watford four days earlier Arsenal needed a response but, with manager Arsene Wenger in the stands serving the third of a four-match touchline ban, it did not come.

Marcos Alonso headed Chelsea in front, Hector Bellerin getting injured in the process, before a sublime solo strike from Eden Hazard took the game out of Arsenal's reach.

A poor day was compounded when former Gunner Cesc Fabregas came off the bench to be gifted the third goal by Petr Cech - with Olivier Giroud's late consolation offering no comfort.

"It's slipped further out of our hands and there's no hiding from that now," Oxlade-Chamberlain told Arsenal TV.

But we play for Arsenal Football Club - if we don't go until the end, we don't deserve to be here

We've got to keep doing that."

A minority of Arsenal supporters have once again called on Wenger to leave as a result of the loss, with the 67-year-old's contract running until the end of the season.

Ahead of the game Wenger said his "gut feeling" would help him decide whether to extend his stay - but with the odds on another season without Premier League success shortening, some supporters want change.

And Oxlade-Chamberlain was left red-faced after 'liking' a tweet which called for Wenger to leave.

The England international is understood to have been mortified when he discovered his error, which occurred as he scrolled through Twitter after the defeat.

He inadvertently pressed the heart-shaped 'like' button on a post by Arsenal Fan TV, which read "Wenger needs to go".

Oxlade-Chamberlain quickly realised the mistake and 'unliked' the post, but some of his 2.2million followers had already noticed and had taken screenshots of it.

The former Southampton man later posted: "I didn't mean to like that post earlier obviously...Didn't even realise I had!"

He was also left lamenting mistakes from Arsenal on the pitch as they lost further ground on Chelsea in the title race.

"We came out in the second half and controlled spells of the game," he said.

"They controlled spells but it was a great goal from Eden Hazard, which we should have stopped earlier at source.

Then a mistake at the end killed the game for us

Olivier got one back but at the end it was too late.

"At the top level, against a team like Chelsea, there's a good chance they'll punish you if you make mistakes and they did that."

Arsenal now host Hull on Saturday before they travel to Germany to face Bayern Munich in the first-leg of their Champions League round of 16 clash, with an FA Cup fifth-round trip to non-league Sutton to follow.