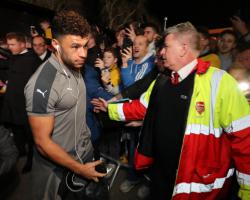 The Gunners travelled to Gander Green Lane knowing a defeat would only add to the clamour for manager Arsene Wenger to leave at the end of the season.

But Wenger's decision to play a strong side paid dividends as Arsenal won 2-0 courtesy of goals from Lucas Perez and Theo Walcott, his 100th for the club, while Sutton performed admirably in defeat.

Arsenal will now face another Vanarama National League side for a place in the semi-finals, with Lincoln visiting the Emirates Stadium next month.

Having been thrashed 5-1 at Bayern Munich last week, and falling off the pace in the Premier League title race, Oxlade-Chamberlain knows it was vital to keep going in the FA Cup.

"The only thing we could do after a really disappointing result in midweek was to get a win," he said.

We came here with a job to do and did that

We are into the next round of the cup and that's all that matters.

"Obviously it is good to get back to winning ways after any loss, even if it is against a team that is a good few leagues below you, so I'm glad we did that.

"We have got a little break now before our next game, we needed that win and we can focus again now on the league."

Arsenal do not play again until March 4, when they begin a potentially season-defining week with a tough league trip to Liverpool.

Wenger's side need a minor miracle to overturn a four-goal deficit but supporters will at least expect them to put up a fight before the weekend visit of Lincoln, which seemingly offers a comfortable route into the last four of the FA Cup.

Unlike the short trip to Sutton, hosting Lincoln in their own surroundings will only increase Arsenal's tag as favourites to advance, but Oxlade-Chamberlain revealed he did enjoy the different scenery on Monday night.

"I grew up in League One so I'm used to these kind of stadiums on tough away nights," he added.

"Having that experience again was one of the most exciting times this season - coming off the bus and seeing people in such close proximity.

"Everyone came out in force to support both sides

I really enjoyed it, even being on the bench in the first half, looking around and seeing all the fans enjoy it and then to have a few moments with the Sutton players in the dressing room at the end of the game, that's what the cup is all about."

Meanwhile, Wenger has said he wants to be able to offer Perez more game-time after the Spanish forward struck the first goal at Sutton.

Reports on Monday that the 28-year-old wants to leave Arsenal in the summer were wide of the mark, according to Perez's agent.

The start at Sutton was just his ninth in all competitions having signed from Deportivo La Coruna in August.

While his representative Rodrigo Fernandez Lovelle admits the player is unhappy, he told Press Association Sport he is not angling for a move away.

"Like any professional, he wants to play," said Lovelle.

"When one does not play he is not happy but we knew it would be difficult and it is a long contract.

No one has spoken of a move."

And Wenger said after the game that he knows Perez deserves more football - but he has a wealth of attacking talent to keep happy.

Asked if he wants to play Perez more, he said: "Yes he is pushing on the door but I have many strikers.

It is true that he deserves a go because he scores goals and is a good player."