Arsenal striker Alexandre Lacazette has been suspended for two further games in the Europa League following his red card in the first leg of the last 32 tie with BATE Borisov, meaning he will miss both legs of the last 16 clash with Stade Rennais.

Lacazette was sent off at the Borisov Arena on Febr​uary 14th for lashing out at Aleksandar Filipovic with his elbow in the 86th minute of the clash the Gunners would eventually lose 1-0.

And, as reported by ​Sky Sports, the Frenchman is now set to miss two further games for the offence, having already sat out the second leg.

The UEFA Control, Ethics and Disciplinary Body (CEDB) have decided to extend his ban to three games, owing to the severity of the dismissal.

The striker, who has 12 goals and eight assists across competitions, including one of each in the Europa League, will thus be inelligible until the quarter finals, should Unai Emery's side get past Stade Rennais in the round of 16.

​Arsenal were able to cope without ​Lacazette in the second leg against Borisov, running out comfortable 3-1 winners on aggregate in the end, thanks to goals from centre backs Shkodran Mustafi and Sokratis Papastathopoulos and an early own goal from Zakhar Volkov. 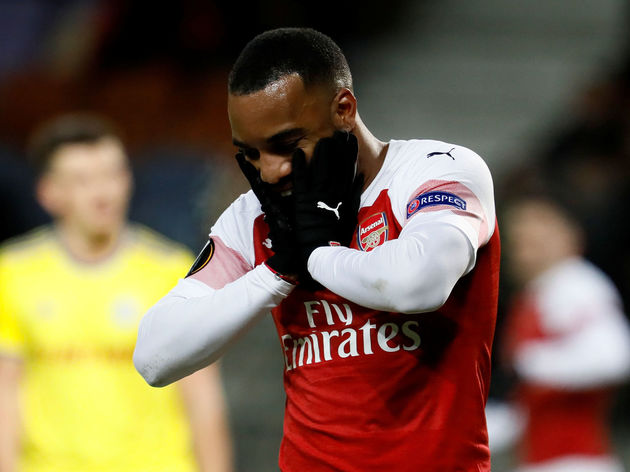 They will square up against Rennes in the middle of March, amid a number of key ​Premier League fixtures. Ahead of the first leg they are due to play Tottenham at Wembley, while a home game against Manchester United sandwiches the tie.

They will then travel to seventh-placed Wolves following the second leg, as they seek to return to the Champions League with a top four finish.