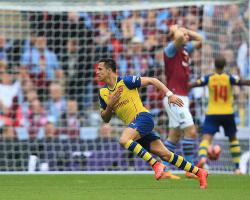 The 26-year-old forward scored 20 goals in 2015, including a superb long-range effort in the FA Cup final win over Aston Villa.

The Chilean said: "I'm delighted to receive the FSF Player of the Year award

Personally, it's been a great 2015 for me on the pitch with both my club and country

But I'm hoping to be back soon to help my team-mates have another successful year."

Gunners manager Arsene Wenger added: "Alexis has had a great 2015 - winning the FA Cup with us and the Copa America with Chile.

"He has made a huge impact on English football since his arrival at the Emirates and I'm very happy that his skill, ability and dedication has been recognised by football fans across the country."

The presentation of the FSF Awards, in association with William Hill, takes place in London on Monday night.