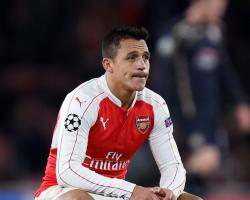 Sanchez has been sidelined since late November and, having been pencilled in for his comeback in Monday night's 2-1 Barclays Premier League victory over Manchester City, he will now be absent for the entire Christmas schedule.

The trip to Liverpool on January 13 is the likely date for his return, forcing him to miss fixtures against Southampton, Bournemouth, Newcastle and Sunderland.

"Sanchez will be back around January 10

We can't count on him around the Christmas period

He's so keen, but he got a little pain in training two days ago and we haven't taken a gamble."

The loss of Sanchez has been offset by the ongoing brilliance of Mesut Ozil, who defied a chest infection to mastermind victory over title rivals City.

Ozil was the Gunners' ringmaster, setting up first-half goals for Theo Walcott and Olivier Giroud and presenting Aaron Ramsey with a superb chance after the interval.

"Ozil had a chest infection this weekend and he was in bed, basically

He had only one training session," Wenger said.

"For a guy who could not prepare well, he has done extremely well physically

I'm a bit cautious because we lost three or four players recently."

In the past, Ozil has frustrated Arsenal fans for floating in and out of matches, but he was given a standing ovation when replaced against City

"In football you need one guy who gives the ball to the one who scores the goal," the Frenchman said.

"In our team, most of the time, Ozil is this player

The guys who sees makes you win, and he is that.

"Ozil is much more mature now, much more keen to take responsibility

I believe he's developed his physical attributes and commitment

You can see his desire to win

He plays to win the game.

"His talent is exceptional and he realise he can help us in every single game."

Yaya Toure set up a tense finish in north London after lofting a ball past Petr Cech, but Arsenal would have been 5-0 up early in the second half had they not been so wasteful.

City boss Manuel Pellegrini claimed his side should not have lost.

But of course it was important to try to win," he said.

"I think we didn't deserve to lose

I think we did better than Arsenal, we had more possession, more attempts, more shots at target."