Alexis Sanchez the right fit for Arsene Wenger up front 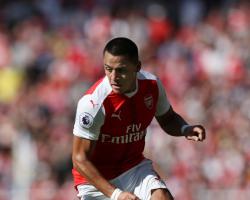 The Arsenal boss had been expected to add another forward to his squad but, having failed to tempt Jamie Vardy away from Premier League champions Leicester, he has started the season without the attacking addition.

Instead he started Sanchez as an out-and-out striker in Sunday's 4-3 defeat at home to Liverpool and looks set to continue with that approach for Saturday's trip to face the Foxes, with Olivier Giroud likely once again be rested following his Euro 2016 exertions with France.

Sanchez, 27, has scored 29 goals in his 66 appearances for the Gunners since moving from Barcelona in 2014 and Wenger feels his attributes lend themselves to leading the line.

Asked if playing the Chile international down the centre could be a long-term option, Wenger said: "I think yes

I think it is worth to try as he has the quality to go behind.

He has played centre forward at Barcelona

He is technically top."

Wenger suggested Sanchez is a player akin to Barcelona forward Luis Suarez, another player he has tried, and failed, to sign in the past.

"He has similar qualities

And he has a good timing to run behind the defenders," he said.

"His run through in the first half when Monreal gave him the ball and he was just offside, a fraction

It is interesting to see how well he copes with that."

Sanchez has played in Copa America in the previous two summers, winning both the 2015 and 2016 additions.

He picked up a hamstring injury last December which sidelined him for almost two months after Wenger opted to play him at Norwich despite the number of games he had racked up.

The Frenchman admits Sanchez is always raring to play but he may have to take a firmer line with him this season and rest him when necessary.

"With him it is difficult to be careful," Wenger said.

Maybe I will have to rest him a bit more, yes.

"When he came back (this summer) he was struggling a little bit (with an ankle injury) but he had a good rest, I gave him five weeks.

I think this week he was already sharper in training."

If Sanchez is going to need rests, Wenger could yet be tempted to delve into the market for a new striker.

But he is keen to give a chance to those already at the club, with Chuba Akpom an option after a strong showing in pre-season.

"I believe a club like ours is focused on giving chances to the players we develop in our own club," he added.

"We have a few strikers who have a chance, if we find the right players we buy.

"It is not that easy - look at a club like Real Madrid, who have they bought? Up front, it is very difficult"

Asked if Akpom was in his thoughts, Wenger said: "Theo as well, it is an important season for Theo, because last year he had a difficult period.

"He can play as a striker and his numbers are excellent when he plays up front, we have Giroud, Sanchez, Walcott, Akpom and (Yaya) Sanogo who is still here but is injured at the moment - the players we buy have to be better."