From the Mike Dean Arena – ​The numbers said there was a one in five chance of Mike Dean sending somebody off at the Emirates on Saturday, with 50 straight reds and 50 second yellows in his 499 (count 'em) previous Premier League games. Roughly a one-third chance of a penalty. Add that together, and the three (ish) people in the ground who had actually crunched the numbers knew there was just over a 50% chance of something Deanian happening.

Not that anybody in north London saw it that way. It was Mike Dean's 500th Premier League game for christ's sake. Not the home fans, not the away fans, not Mikel Arteta, stood in his technical area acting like he isn't a life-size animatronic model of Captain Black out of Captain Scarlet.

At the Emirates for Mike Dean's big 500th game. Arsenal and Sheffield United will also be playing football.

The wryest smile in football was on full display in the first half when he went to investigate what had Oli McBurnie superglued to the turf. The answer was 'Alex Lacazette's swinging boot caught him square in the spuds after a clearance'. Amateur lip-reading suggests that Dean's answer to Arsenal's physio was less detailed. 'It's his bollocks'.

Have you ever gone to a football match and spent half the game with your eyes tracking the referee? You probably haven't, because you're...well, normal. But for the full Mike Dean experience, you sort of have to.

An early booking was dished out to Oli Norwood to stamp his authority early, before a movement to dismiss a penalty appeal a couple of minutes later which would have looked ridiculous coming from any other referee. He pulled off another in the second half to an extended round of boos from the home crowd, running away with his arms outstretched like a kid pretending to be an aeroplane. If we were allowed to hear what referees say into their mics, the Emirates would probably have been treated to a faint 'nyoooooom....'

Most of it's pretty dull. The not-so-hidden secret about the Wirral Wizard is that he's one of the two or three best referees the Premier League's ever produced, and you don't get to that level by being a clown all the time. Watch him closely and you'll see good positioning, him clocking his assistants raising their flags and making split-second decisions on whether or not to play an advantage. Y'know, referee stuff. 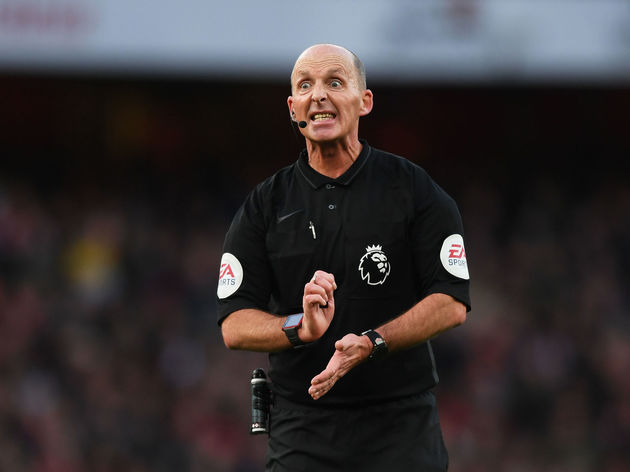 The idea of Main Event Mike comes from the way he makes his decisions, rather than the decisions themselves. His flourishes, his second of dramatic hesitation before he points to the penalty spot, the nod and a wink to the viewing public and the players. His red card rate isn't high compared to the likes of Mike Riley and Phil Dowd, but neither of those men ever felt like characters in the scripts of the games they refereed. MEM does.