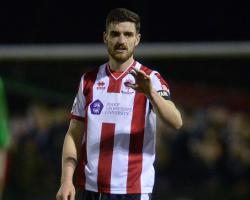 The National League leaders have become the first non-league team since 1914 to reach the last eight of the FA Cup.

Now they have the target of bringing down Arsenal, the 12-time winners.

But the Gunners are out of sorts and have lost five of their last seven matches, including two brutal 5-1 defeats at the hands of Bayern Munich.

The second of those losses to the German giants came on Tuesday, extinguishing Arsenal's hopes in the Champions League

And with the Premier League title out of reach it would cap a dismal spell for Wenger if Lincoln were to kill off another route to silverware.

"Some Arsenal fans might be going there wanting us to win.

Such a scenario would be the stuff of nightmares for Wenger, who is in his 21st year as Arsenal manager and yet to announce whether he will stay on beyond the summer.

Lincoln are unafraid of their Premier League opponents, and Waterfall hopes the star names are all brought out for the televised tea-time fixture.

"We'll go there believing in ourselves

"We want their big players to play

Their manager is under pressure so I would expect their big names to play."

Barcelona are even inspiring Lincoln, after the Nou Camp giants achieving the unlikely feat of knocking out Paris St Germain from 4-0 behind after the first leg of their Champions League tie.

"If they can do what they did, why can't we beat Arsenal?" Waterfall said

The Clarets were Lincoln's fifth-round victims, the biggest scalp yet in a campaign that began with a goalless draw and subsequent replay win against Guiseley in the fourth qualifying round

While Arsenal were being humiliated by Bayern on Tuesday, Lincoln were trouncing Braintree 4-0 to move a step closer to what remains their priority - promotion back to the Football League

Lincoln are bound to be positive before one of the biggest matches in their history, but manager Danny Cowley is also a realist

He said: "If we get on the right side of the result, it would be the biggest upset in the history of the greatest cup competition in the world."

He is a Wenger fan too

"He's forgotten more than I know

"We've got huge respect for him as a man and as a manager."

Cowley, and brother Nicky, have won nationwide admiration for their job as Lincoln's management team, and their reputations would soar if the underdogs give Arsenal any sense of a scare this weekend.

"I think all the pressure is on Arsenal, but we try to put energy and focus into our own team," said the Imps manager

"We're not going to fear it

We're going to embrace it and enjoy it, but we'll go there with a game plan

"We want to be us

It would be easy to park the bus, but that's not us."