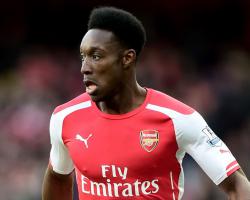 Up until a few weeks ago, when Arsenal had lost their cutting edge ahead of goal.

Much like seasons recently passed, the title challenge was crumbling right on cue with the resurgence of Tottenham and Leicester City' s continued good form

It really seemed like it was slipping away, the one opportunity some described as Arsenal's for the taking considering the incredibly lacklustre performances of the other traditional heavyweights

This was all before the giant-slaying Foxes went to the Emirates and lost.

Whilst Danny Welbeck's last minute winner only served to move Arsenal within two points of the league leaders, the Gunners now have a significant psychological advantage over their fellow challengers as the pressure of being so near glory mounts ever higher

Doubts could be starting to creep in.

The two still have to play each other but it is Spurs who have the tougher fixtures going into the last dozen games.

Arsenal will probably be feeling they are back in control now and this probably is as good a chance as any to finally win the title after what seems like an eternity for the Gunners but then again it cannot be forgotten that they tend to slip up just when it matters.