In the end we were well beaten, but that's not the whole story.

Until Ozil's horrendous penalty miss we had Bayern on the run - our midfield were causing them problems and their defence didn't have the pace to handle us. 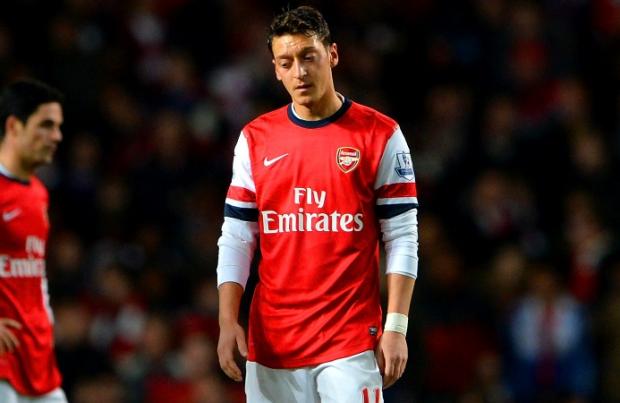 The penalty took our momentum away and from that point on Bayern were in the ascendancy.

When Szczesny was red carded for his challenge on the theatrical Robben that was the end of our challange. Cazorla was sacrificed (why not Ozil?) and we attempted to park the bus.

Tony Kroos gave Bayern the lead with a magnificent strike, and Thomas Muller finished things off two minutes from time.

I'm not saying we can't go to Munich and reverse the scoreline, but even the most optimistic Gooner would agree that it's unlikely.

Irritatingly, Bayern are overrated to me - they're good but not the 'best team in Europe' as they're being labelled. They were beatable last night and we self-destructed.

Arsenal saw goalkeeper Wojciech Szczesny sent off after Mesut Ozil had missed an early penalty, and eventually went down 2-0 against Bayern Munich in the Champions League round of 16 first leg clash at the Emirates Stadium.

There was a blistering start to the European tie - a year on from their last encounter in north London - and the holders could have snatched an early lead when Toni Kroos fired in a 25-yard effort towards the top corner, which Szczesny tipped over.

Yaya Sanogo had been a controversial selection in attack ahead of France striker Olivier Giroud, whose off-field actions have made headlines in recent weeks.

However, the summer free transfer from Auxerre - who has been out for several months with a back problem - saw a close-range shot palmed away by Manuel Neuer, before the German keeper saved a tame spot-kick from Ozil on eight minutes.

There was more drama just before the break as Arsenal goalkeeper Szczesny was shown a red card for bringing down Arjen Robben in the penalty area - only for full-back David Alaba to side-footed his spot-kick against the base of the post.

Bayern, though, went ahead on 54 minutes with a superb 20-yard strike from Kroos, which was whipped into the top corner past substitute keeper Lukasz Fabianski.

Arsenal tired heading into the final 20 minutes as Robben exploited the space in front of a jaded backline.

Eventually, the pressure told as substitute Thomas Muller headed in a late second goal to give Bayern a strong advantage ahead of the return leg at the Allianz Arena next month - where Arsenal won 2-0 last season, but ultimately lost on away goals.

After a superb save from Szczesny to turn over a strike from Kroos - a reported summer target for Manchester United - which was heading to the top right corner, Arsenal went on the offensive.

Sanogo's close-range shot was palmed away by Neuer and the keeper also stopped an angled drive from Santi Cazorla before the home side were awarded a penalty in the eighth minute.

Ozil's brilliant reverse stepover bamboozled Jerome Boateng, who upended the Arsenal midfielder and was booked. However, the spot-kick from the inconsistent German playmaker looked tame as he chipped the ball down the middle following a two-step run-up and Neuer - a childhood friend of Ozil - beat it away.

England winger Alex Oxlade-Chamberlain was inches away from connecting with a flick-on from Sanogo, which had Neuer racing out to the edge of the Bayern penalty area.

Arsenal were forced into a change on 31 minutes when left-back Kieran Gibbs hobbled off with what looked like a hamstring injury and was replaced by Nacho Monreal.

Bayern continued to probe and Robben's low shot was blocked by Per Mertesacker following another patient build-up down the left.

Then in the 37th minute the Dutch forward latched on to a chip into the Arsenal box, which he touched past Szczesny and was brought down. Italian referee Nicola Rizzoli had little choice but to award a penalty and show the keeper a red card - the 100th accrued by the Gunners under Wenger's managerial reign.

Szczesny made an offensive hand gesture as he trudged off down the tunnel and after a considerable delay as Cazorla was replaced by Fabianski, Alaba struck the base of the left-hand post.

Bayern made a change for the start of the second half when Boateng, walking a discplinary tightrope, was replaced by Marcio Rafinha.

Former Chelsea winger Robben continued to be roundly jeered by the home supporters and he cut inside to fire an angled shot which Fabianski saved.

Bayern made the breakthrough in the 54th minute when captain Philipp Lahm fed Kroos on the edge of the penalty area, and as the Arsenal defence backed off, he cracked a fine curling shot into the top-right corner.

Sanogo was shown a yellow card for clattering into Neuer, which Wenger claimed was overreaction by the German, before Fabianski got a hand to Robben's low cross into the six-yard box - where Mario Mandzukic was loitering with intent at the far post.

Arsenal tired heading into the final 20 minutes, and Robben exploited the space to curl a 20-yard effort just wide before Mario Gotze's powerful header was deflected behind.

Wenger made a change for the final quarter-of-an-hour as Tomas Rosicky replaced Oxlade-Chamberlain.

Bayern substiutute Muller looked to have been tripped by Laurent Koscielny in the right side of the penalty box, but the officials waved play on.

Lahm's cross from the right was headed in by Muller in the 88th minute, and it was almost 3-0 in stoppage time when Kroos' low shot struck the base of the post.