Arsenal made amends for a below-par first half performance against Leeds, securing victory and progression to the FA Cup fourth round courtesy of a 1-0 victory that was sealed in the second half.

Leeds dominated from the first whistle and Arsenal struggled to deal with their composure and intensity. The Whites boasted 66% possession inside the opening 13 minutes and Patrick Bamford hit the bar shortly after that stat disappeared from the screen.

15 - Leeds attempted 15 shots in the opening 45 minutes against Arsenal, the joint most shots the Gunners have faced in the first half of a game this season (also facing 15 in the first half against Liverpool in the Premier League back in August). Lethargic. #FACup #ARSLEE pic.twitter.com/HKiGaWfhok

The Championship side continued to control the game and Emiliano Martínez produced a fine save that came from a combination of Sokratis and Ezgjan Alioski as the pair tussled for a Luke Ayling cross. Arsenal were abject throughout the opening 45 minutes and were lucky to head in at 0-0 as the half-time whistle blew.

A different Arsenal emerged for the second half and took the lead within ten minutes, Reiss Nelson profiting from pinball in the Leeds box to tuck home Ahead of the game, it looked like Mikel Arteta had opted for a back three with Reiss Nelson and Sead Kolsainac as wing backs - that seemed to make sense. Once the game kicked off, it was a completely different story and Leeds absolutely dominated a back four that included Sokratis at right back. 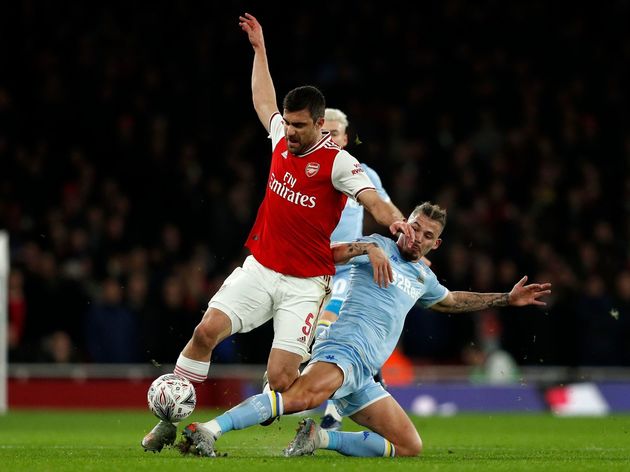 The Greek international and Kolasinac completely failed to deal with the Leeds wingers pressing high up the pitch, running into the channels and drifting inside with the ball. The midfield pair of

Guendouzi all over the place. The midfield has zero structure. Xhaka getting hung out to dry.

Guen and Xhaka occupie and vacate the same space, making our midfield look both overpacked and nonexistent. Needs a tweak somewhere.

The half-time pep talk worked and seemed to consist of instructions to play higher up the pitch as a team and up the intensity to something approaching the desired level. The main difference was that it stemmed the tide in midfield, and  got players closer to their attacking trio and brought them into the game.

However, the tempo fizzled out far too quickly once the lead had been taken and the evening ultimately raised more questions than it answered about Arteta's Arsenal. It's still early days, but a reluctance or inability to change the game in the first half and an odd set-up in terms of formation will be causes of concerns for Gooners everywhere. Leeds would have been out of sight by half time if it wasn't for Emiliano Martinez, who was far busier than anticipated between the sticks.

Jack Harrison stung his palms from distance early in the first half, before the combined Sokratis and Alioski effort drew lightning reflexes to claw the ball away from goal. In truth, these were simply the most high-profile saves in a first half littered with stops from the Argentine. He also had to be quick off his line on a couple occasions, in order to compensate for the gaping space behind his defence.

Martinez is making some decent saves, we’d be struggling without him so far. #ARSLEE #FACup

54'- SAVE! Bamford is given too much time and space as he runs at Arsenal, but Martinez is down to save his shot. 0-0 #ARSLEE #FACup

The second half was much quieter and Martinez was required to make just one save of note, stopping a Bamford shot from distance - just moments later Arsenal had opened the lead and his last contribution of the evening had been an important one.