​The pressure continues to mount on Unai Emery as the Spaniard saw his team pegged back by Wolves in what proved to be another home draw for the Gunners.

The hosts had struck the first blow through Pierre-Emerick Aubameyang just past the 20-minute mark, before Raul Jimenez headed home with 15 minutes remaining to earn the visitors their second consecutive point at the Emirates.

The game started with the visitors very much on the front foot, with Arsenal's midfielders seemingly struggling to adapt to the diamond system deployed by Emery. However, the home side did well to weather the early storm and they quickly found their groove going forward - taking the lead through a tidy Aubameyang finish after some good work from Alexandre Lacazette in the box.

The goal settled the hosts down and they began to dominate proceedings - getting a lot of joy between Jonny and Romain Saiss down Wolves' left-hand channel. However, chances for Lucas Torreira and Lacazette were squandered and the dangerous visitors grew back into the game towards the end of the opening period, Matt Doherty spurning a golden opportunity to equalise as his left-footed strike was denied by Bernd Leno.

The second period started in a similar fashion to the first - with the visitors on the front foot. However, as Wolves pressed for an equaliser, the home side began to have more joy in transition and their playmakers had a little more space to operate. Despite the open nature of the contest, the Gunners failed to create anything of substance and with 15 minutes to go, the hosts were pegged back after Raul Jimenez headed home expertly from a lofted Joao Moutinho 'hook' into the box from the right.

The equaliser set up a grand-stand finish to proceedings, with Arsenal springing into life once more while Wolves looked their threatening-selves on the counter. However, neither side were able to find a dramatic late winner as Wolves' defence, that had looked vulnerable in the first-half, stiffened up.

A lot has been made of the relationship between Emery and Mesut Ozil in recent weeks - with the Spaniard gifting the German just his second Premier League start on Saturday afternoon.

Slotting into the tip of the diamond, Ozil looked bright throughout - always looking for an incisive pass when on the ball and working hard off it, something that was very much appreciated by the home faithful.

Ozil, along with Dani Ceballos and Lucas Torreira, rotated their positions constantly throughout the first half - confusing the Wolves duo in the middle of the park. In the second period, Ozil's influence grew as he spearheaded Arsenal's attacks in transition. He started to take more responsibility by getting on the ball as much as he could late on, but despite his best efforts, Arsenal were forced to settle for another disappointing point at the Emirates.

It looks like Kieran Tierney is well on his way to becoming a fan-favourite at the Emirates.

Kieran Tierney is having a good game. Great buy! Excellent defensive performance. Kept Adama, who finished City, relatively quiet so far. Still early, but might turn out to be the best Arsenal left back since Ashley Cole.

After losing out to Adama Traore a couple of times early on, the former Celtic man kept the winger quiet for the rest of the game, while his teammates offered him little protection against the surging runs of Doherty from wing-back.

The Scotsman was sensible in his positioning, very few times did he bomb on into the final third as he was wary of the Wolves threat on the counter. When he did break into Wolves' defensive third, which was mostly after the equaliser, he did look a threat.

Promising signs from their summer-signing.

We all know how dangerous this Wolves side can be when playing against a side that enjoys having possession - but today, they looked more threatening after long periods of possession, rather than on the counter. 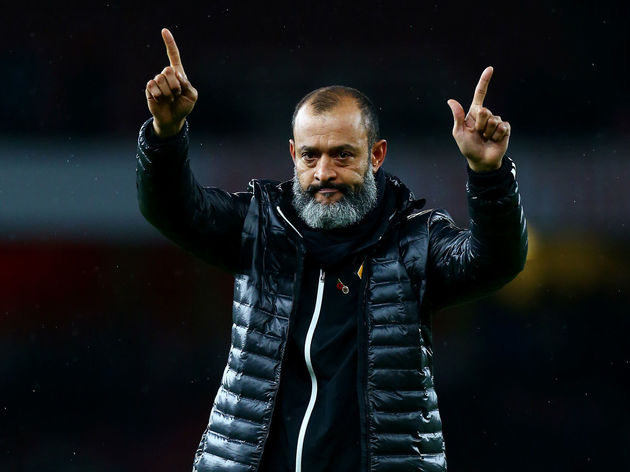 The visitors had spells at the start of both halves when they were on top, but they struggled to create much when they entered the final third. A Doherty effort just before half-time was the only chance of any note before the Jimenez equaliser.

Their second-half showing was much improved as their defence started to settle down. The two technicians in midfield began to dictate things in the middle of the park and in the end, they were the side that looked the more likely to get the winner late on.

It was hard to pick a 'stand-out' performer from Wolves' display this afternoon. However, Diogo Jota did cause the Arsenal backline a few problems with the positions he took up on the pitch.

Jota so close to getting the winner, what a powerful runner he is ffs.

Arsenal drew watched most of that game wolves unlucky not to win it. Gotta say diogo jota is fantastic!! Brilliant striker.

Diogo Jota is a baller

Starting as a left-forward, Jota would often drift inside and take up positions between Matteo Guendouzi, who was at the base of midfield, and the Arsenal defence. The Gunners failed to pick him up on a number of occasions and he could've had the winner late on after picking the ball up in the left-hand channel before beating two or three Arsenal defenders as he drifted inside, unfortunately, his final touch was a little too heavy as Leno cleared.

His work-rate off the ball, which saw him fill in in midfield to ensure Ruben Neves and Moutinho weren't out-manned, was also fantastic.

Before taking on Leicester at the King Power next Saturday, Arsenal face Vitoria SC in the Europa League on Wednesday in Portugal.

Wolves are also in Europa League action in the week as they host Slovan Bratislava at Molineux on Thursday night. They then return to Premier League action on Sunday, playing host to Aston Villa.