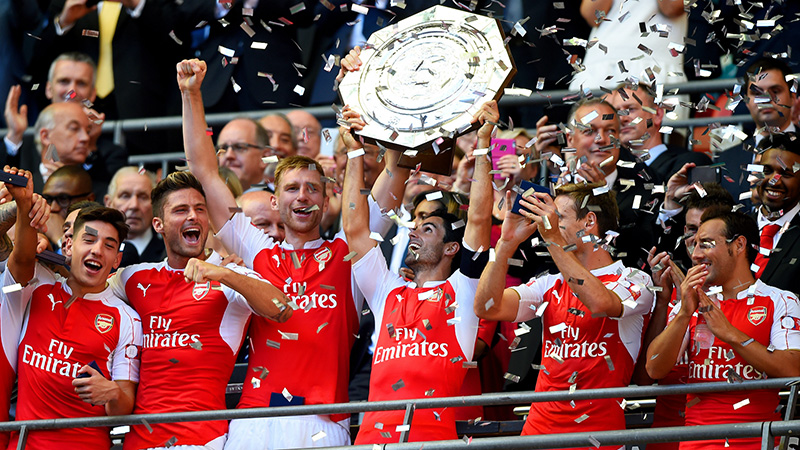 However the real stuff starts next week.

Both sides fielded strong teams for what is usually a kickabout in the sunshine but there was needle in this game, noty least between the two managers.

Alex Oxlade-Chamberlain smashed home a glorious effort - the only goal of the game - and we took the Community Shield home, but what does this mean in the context of our Premier League season?

The truth is not a lot, but a win is a win, and it can only bne a confidence builder for the weeks to come. last season we started weakly and were always playing catch-up - this season we have to come out of the blocks running, and today's victory over the champions will help.

Arsene Wenger finally secured victory over Jose Mourinho as Alex Oxlade-Chamberlain's first-half goal was enough to give Arsenal a 1-0 win against Chelsea in the FA Community Shield at Wembley.

The veteran French coach had not beaten his rival in 13 previous attempts, which the Portuguese suggested should be an ongoing cause for concern.

However, that unwanted statistic was put to bed following a confident display from the FA Cup winners, who may well prove to be serious challengers to Chelsea's hopes of retaining the Barclays Premier League title.

Goalkeeper Petr Cech lined up against his old club following a £10million summer move across London, while Theo Walcott, who has just signed a lucrative new deal, led the Arsenal attack.

England midfielder Jack Wilshere missed out, presumably as a precaution against injury.

Chelsea started with Radamel Falcao on the bench, the Colombian loaned from Monaco after an indifferent season at Manchester United.

The league champions were lively early on but on 22 minutes Mesut Ozil whipped in a free-kick from the left which Walcott flicked back goalwards, but the ball dropped straight into the arms of Blues goalkeeper Thibaut Courtois.

Two minutes later Oxlade-Chamberlain had fired the Gunners ahead. Ozil played the ball across to Walcott in space, who in turn fed Oxlade-Chamblerlain on the overlap down the right.

The midfielder strode into the Chelsea penalty area before cutting back inside Cesar Azpilicueta and drilling a left-foot shot into the far corner. It was Arsenal's first goal against Chelsea since January 2013.

The Blues were soon looking to reassert their authority though as Ramires curled an effort just wide from outside the penalty area before somehow heading over Loic Remy's cross when arriving at pace in the six-yard box.

As half-time approached, Oxlade-Chamberlain got away down the right again, this time his floated ball back across goal was headed away by Branislav Ivanovic just as Nacho Monreal set himself to score.

Mourinho made a change for the second half when Remy was replaced by Falcao and soon afterwards sent Oscar into the action, for Ramires.

Arsenal, though, remained an effective defensive unit, something which had been lacking in recent meetings with the Blues.

On the hour, Chelsea midfielder Eden Hazard broke into the right side of the penalty area. However, the Belgian, last season voted Footballer of the Year by football writers and his fellow players, blasted the ball high over Cech's goal.

Cech produced a fine save to keep out a curling 20-yard free-kick from Oscar in the 68th minute.

Arsenal made another change with 13 minutes left when Oxlade-Chamberlain was substituted for captain Mikel Arteta, whose last appearance before injury problems was in November. Chelsea also switched John Terry for forward Victor Moses.

Arsenal almost made it 2-0 in the closing stages when Santi Cazorla's chip-shot was saved by Courtois, and Aaron Ramsey's follow-up was blocked.

Tempers threatened to flare up after substitute Kieran Gibbs fouled Nemanja Matic as Arsenal closed out a morale-boosting win, with Gibbs denied in stoppage time by another good block from the Chelsea keeper.