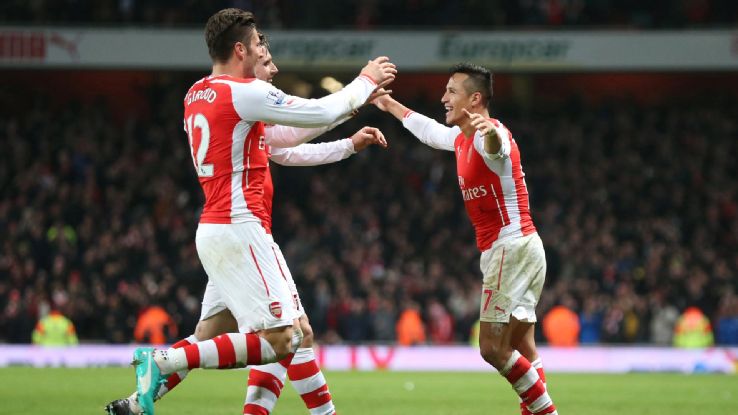 The victory extends the Gunner’s winning streak to three and restores some much needed confidence. Southampton created chances, but never seriously threatened the Arsenal goal, meaning the defence is playing more solidly.

The first half saw the game perched rather evenly most of the way, but the Gunners created the best opportunities, but couldn’t convert.

Welbeck was played through one on one with Forster, the Saint’s goalie, but he hit wide of the post. He had another header saved by Forster just before halftime.

The best opportunity for the Saints came early, but Pelle blasted the ball over the bar. It would be their best chance of the match.

The second half started to open up a little more, but neither side could create decisive opportunities.

Olivier Giroud entered the game and soon chances started to come aplenty. Giroud volleyed straight at Forster, Welbeck’s shot was saved after a neat flick by Giroud, and Forster saved a looping header from Giroud.

Arsenal, to be fair, did become more dominant once Alderweireld left the field, leaving the Saints down to 10 men.

The Gunners finally scored, despite the referee Andre Marriner, who ignored a blatant handball, Sanchez converting a Ramsey cross seconds after the ignored offence.

Marriner ignored another offence two minutes later when Sanchez was brought down in the area. It didn’t matter as Arsenal were able to see out the match in style.

Martinez 7.  Another solid outing from Emiliano. His distribution was good, his confidence to claim crosses impressive, and his overall serious demeanor was good to see.

Chambers  7.  A good game from Chambers, who largely kept his wing under control. Was effective coming forward and put in a number of decent crosses.

Mertesacker  7.  Another good game from Per.

Koscielny  8.  Hopefully hasn’t injured himself again. Threw his body around a number of times, making key interventions. Made an important block of a Southampton shot in the second half.

Monreal  7.  Appeared to hurt himself early in the match, but managed to shake off the knock and finished the game.  Was effective for the most part, but there was one obvious mixup when Welbeck expected him to come forward.

Flamini  7.  We didn’t control the midfield all the time, but Flamini battled hard and helped shield the defence. Moved forward a lot more in the second half.

Ramsey 6.  Assisted on the winning goal, but forced several shots and looked a little sloppy at times. Still he worked hard on both ends of the field.

Cazorla 8.  Another strong game for Santi. He was buzzing all over the park and made a number of important passes and moves. He also hit a couple of decent corners for a change.

Oxlade-Chamberlain 7.  Had a decent chance in the first half saved by Forster. He injected some pace into the attack and was effective for the most part. Didn’t look happy coming off for Giroud.

Welbeck  7.  He had several good chances to score, but Forster had his number. He ran hard and most always looked dangerous.

Sanchez  7.  Alexis at times looked sloppy and at times he wasn’t effective. However he scored his fourteenth goal of the season by being in the right place. Even when he isn’t at his best, he’s a handful for the opposition.

Giroud 8.  My man-of-the-match. A powerful shot, a great header, a lovely little touch pass to Welbeck and a key piece of control in the buildup to the winning goal. Excellent.

Podolski 7.  A lively outing for Podolski, who had once shot fizz wide.