In the immediate aftermath of the 2011 Champions League round of 16 draw, you might have forgiven the pained grimaces found upon Arsenal fans' faces. Pep Guardiola's Barcelona, who were undisputedly the world's greatest footballing side of the time, were coming to town.

Could Arsène Wenger roll back the years and inspire his youthful side to produce one of the memorable European nights in the club's history? Many (understandably, it must be said) were unable to imagine achieving such a feat. And yet...

Everyone associated with Arsenal could do nothing but hope their prayers might somehow be answered. Perhaps their opponents would have an uncharacteristically disappointing day at the office? Or better still, what if Wenger's side found a way, any way to provide their supporters with a magical night in north London?

Well, as we all know, the Gunners' prayers were answered and then some as they staged a scintillating late comeback to win the first leg 2-1. While they would controversially exit the tournament in the second leg, this was arguably the greatest night the Emirates has ever witnessed. Having trailed 1-0 for the majority of the 90 minutes, the Gunners rode the Barça storm, grew into the game, and were rewarded as Robin van Persie struck an equaliser in the 78th minute.

And then, five minutes later, substitute Andrey Arshavin sent ​Arsenal fans into a frenzy, and the Emirates into sheer and utter ecstasy after he netted the dramatic winner. The result on the night, the performance, and the dramatic manner in which the contest unfolded marks this game as one of the greatest moments in Arsenal's recent history.

It wouldn't be an exaggeration to say this match continues to send shivers down the spines of many an Arsenal fan. We promise we don't excessively hold onto moments of our club's past, though...

Some would say Arsenal got a tad lucky to come away with a 2-1 victory. And maybe it was a slightly fortunate affair. But, at the end of the day, the Gunners stuck to their pure passing principles, and ultimately outdid Barça at their own game.

There's no denying the incomparable quality that this ​Barcelona side were blessed with at the time. Xavi, Iniesta and Busquets were, as a central midfield triumvirate, on their own divine level. Chuck Dani Alves into the mix, and a certain Argentinian up front - you've got yourself quite a technically gifted team. But, Wenger saw his side stick to what they did best, and managed to match the majestic midfield of their opposition with an outstanding midfield performance of their own. And, with Barça rocking, Arsenal reaped the rewards of their relentlessness to produce a truly remarkable result.

He was only 19-years-old at the time, but ​Jack Wilshere produced the performance of a lifetime that was not only beyond his years, but more than a match for Barça's excellent midfield trio.

The young Englishman competed for anything and everything. He won his duels, he moved the ball through the lines expertly, and quite honestly couldn't be contained by the likes of Xavi and Iniesta. 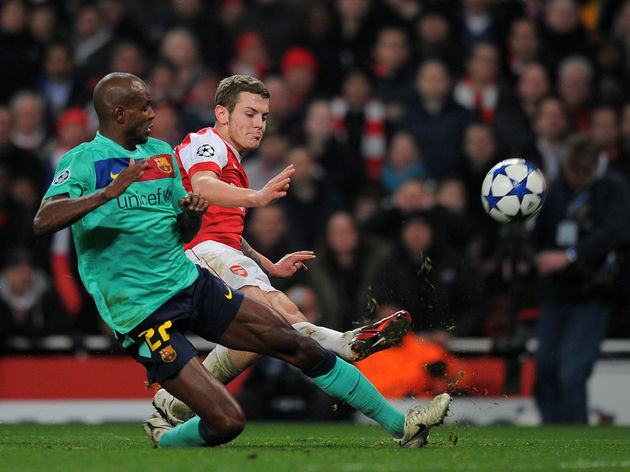 Put simply, this was one of the great individual performances of any Arsenal player down the years. Supremely confident and incomparably complete, Wilshere well and truly set the Emirates alight that night. If you haven't watched his individual highlights, get to it as soon as is humanly possible.

Now, we must be careful not to take anything away from Arsenal's excellent result. They deserved it for the dogged determination and resilience they showed prior to putting Barça to the sword in spectacular fashion.

But, it is true that Catalan giants could have been out of sight had their forwards been a fraction more clinical in the final third. For all the issues he caused Arsenal on the night, ​Lionel Messi was guilty of wasting several golden opportunities to put the tie out of the Gunners' reach. Wenger's troops survived some real heart-in-mouth moments as Messi poked wide here, and scored an offside-goal there, and Pep Guardiola's side were ultimately punished for their wastefulness in front of goal.

On another day, Messi may have scored two or three. But thankfully for the Arsenal, the diminutive Argentine magician left his shooting boots in Barcelona for this one.

But, such is the quality of his overall game, Messi remained a real thorn in Arsenal's side, and each and every threat carried by Barça sprung from a mesmeric Messi run, a wonderful pass, or a dazzling dribble. It was his incisive, defence-splitting through-ball that set David Villa on his way for the opening goal, and even if he ought to have scored at least once, the threat he carried with the ball at his feet even if he didn't find the back of the net was a joy to witness.

Right, let's not be overly harsh on the Argentine. He was only 24 at the time (yeah, let that sink in for a second!) so he was within his rights to have a slightly dodgy trim at the time. Thankfully the G.O.A.T has sorted it out now, because the mop on top of his head wasn't a great look. Maybe that's why he lacked his clinical edge in front of goal. Actually maybe not - he had the same haircut in the second leg, and scored twice. Probably wasn't the hair then.

Take nothing away from Wilshere for what he managed that night. He showed the world was at his feet given he was capable of competing with the world's best players on Europe's biggest stage. It wasn't just Arsenal fans getting giddy with excitement - England had themselves their own midfield maestro who, at 19-years-old, had given the likes of Xavi and Iniesta a real run-around. 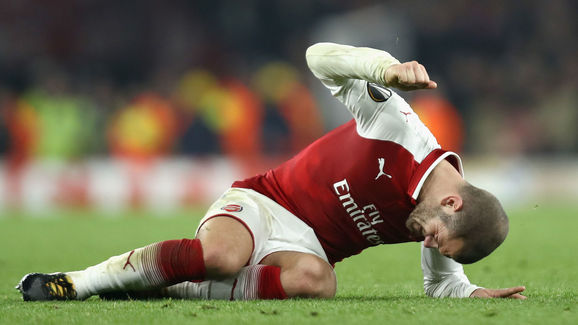 Unfortunately, relentless injuries and fitness issues prevented him from building on such a brilliant individual performances. We never quite got to see Wilshere fulfil his potential, and what might have become on one of Arsenal and England's great hopes. Thought we might as well chuck in a Barça player too, and the case of Adriano is quite a funny one. It's not his fault his name was synonymous with one of Brazil's greats - you'd anticipate a Brazilian named Adriano to be quite the player. Not that he was that bad - he fulfilled his squad role admirably, and good on him for cutting it at the Nou Camp for six seasons. He's just an easy one to forget, that's all.

​Unfortunately for Arsenal, the return leg at Camp Nou brought their hopes of quarter-final progression crashing down. Barça ended up 3-1 winners, but the Gunners were at the receiving end of a disastrous refereeing decision that essentially killed the game at a crucial moment in the tie.

Robin van Persie had just struck the equaliser on the night to take the second leg to 1-1 - Arsenal had an invaluable away goal, and with half an hour to go, it became a real possibility that the ​Premier League side might complete a sensational upset. Well, after Van Persie was shown a ​second yellow card for continuing to play after failing to hear the referee's whistle, the tie swung Barça's way, and they put Arsenal's ten men to the sword. Wenger and his aggrieved side exited Europe, and Barça went on to win the 2011 ​Champions League.

Unjust, unfair, but at least we had a night to remember. It's just a shame its legacy was somewhat tarnished by the ridiculous refereeing of the second leg. Oh well.