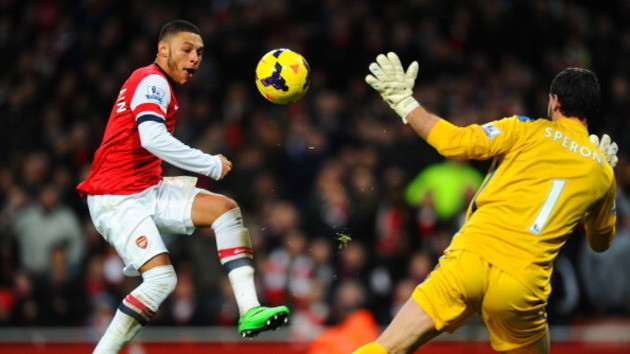 It was a just result which reflected the dominance Arsenal displayed.

The Gunners dominated the first half and for the first half hour it was rare to see Palace enter the Arsenal half of the field or to keep possession longer than ten seconds.

Despite the dominance Arsenal created few good chances. Monreal’s shot on the overlap was well saved by goalkeeper Speroni, as was an Ozil free kick that was almost deflected by Koscielny.

Anxious Arsenal fans were rewarded early in the second half when Cazorla sent a stunning cross field pass into the path of Alex Oxlade-Chamberlain, who kept his composure and deftly volleyed the ball home.

At this point the Gunners relaxed and tried to play keepaway and almost got punished for it as Palace started to come into the game and create chances.

Cameron Jerome almost headed home a Bolasie headed pass, but Szczesny made a huge save to keep the game even.

Oxlade-Chamberlain made the game safe in the 73rd minute, using his pace once again to break free and score past the stranded Speroni. Following this Arsenal were able to coast to victory.

Szczesny  7.  Had little to do for most of the game, but he was there when he had to be, saving from Jerome in the second half.

Sagna  6.  A quiet game for Bacary. He wasn’t really able to get forward and put in any crosses. Probably had trouble combining with Cazorla.

Mertesacker  7.  A solid game for Per who won most of his duels and kept Palace from threatening the Arsenal goal.

Koscielny  7.  Like Per he dominated the back and kept the speedy Jerome under wraps.

Monreal  7.  This week Nacho managed to get his shot on goal, unlike last week’s game. His also managed to move forward and provide an overlap on a number of occasions.

Arteta  7.  A steady solid game for Arteta. Gunner’s fans will be concerned by his limping late in the game.

Oxlade-Chamberlain 8.  Man of the match. Two goals from two of the times he used his speed and raced into space. He played well throughout, but was a little tired at the end.

Ozil  7.   Almost scored from a free kick early on and put Monreal through one on one with the keeper. He also appeared to tire late in the game.

Cazorla  8.  There were times when Santi made a few mistakes and was pushed off the ball and there were times when he treated the audience to some jaw dropping moments, such as the trap he made from a high cross field pass. He also provided the stunning pass that found the Ox for the first goal.

Giroud  7.  The service to Olivier was poor, but he kept working and linking up with teammates. His lovely little pass to the Ox helped create the second goal.

Podolski  6.  Had few chances, the best one he thumped into the side netting. However, he worked hard defensively and was busily involved in the match.

Rosicky 6.  Good cameo for Tomas, the first time he’s played since he broke his nose. Unfortunately he bumped heads with the Ox, although the Ox seemed the worse off for it.

Gibbs  n/a.  Came on late to provide some defensive stability.

Bendtner  n/a.  Too little time to make much of an impact.