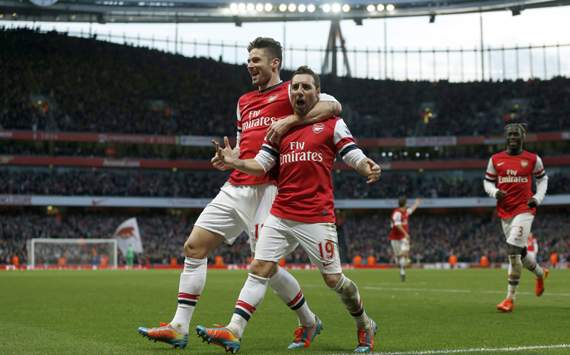 It was at times an untidy game, but Arsenal were able to kick the game into a higher gear when they needed.

The Gunners came out strong in the first 15 minutes, but  only created one significant chance, Ozil’s weak shot being cleared off the line. Then the team became untidy and lost focus and Fulham were able to come back into the game, in terms of possession and in creating a few chances, Sidwell’s the most threatening.

Arsene Wenger must have ripped into them at halftime as they came out firing in the second half, creating a number of chances and dominating possession.

Santi Cazorla finally opened the scoring, pouncing on a Wilshere cross and putting Arsenal ahead. He scored a second minutes later and from that point the Gunners took their foot off the pedal.

Aside from a good chance for Darren Bent near the end, Fulham never really threatened to come back into the game. However, I found the game frustrating as I wanted Arsenal to score a couple more and they never really seemed interested in running up the score.

Szczesny  7.  A decent game for Szczesny, who had to come off his line several times to deny Fulham. The last time he flubbed it and Bent somehow missed the ensuing chance. He also spilled a late shot by Kazami (I believe), but managed to collect the rebound.

Sagna  7.  Another solid game for Bacary. He had several good crosses in the first half as well.

Mertesacker 7.  Played a very solid game, but allowed Bent to get behind him late in the game.

Koscielny 8.   Excellent game from Laurent. Tidied up a number of sticky situations during the game.

Monreal 8.  I never expected Nacho to play after talk about a possible fracture and then of  twisted ligaments. Solid defensively and offensively.

Flamini 7.  Another good game for Flamini, helping to dominate the midfield and break up Fulham’s attacks.

Wilshere 7.  A decent game from Jack, who looked dangerous, but had trouble breaking or passing through the Fulham defence. Eventually supplied the tying assist.

Ozil  7. Mesut looked a little sloppy at times, but still helped to keep the Arsenal motor running. Hopefully, he’s on the way back.

Gnabry 7.  A good game from Serge who looks very comfortable moving into the middle. Took a number of shots, most hit rather poorly, but one forced a good Stekelenburg save.

Cazorla  8.  Man of the match. Two goals and hopefully now he’s back in the groove. His first half was not very good, but he was buzzing in the second half.

Giroud 6.  Not as involved as usual, he only had a couple of chances, both of which he skied over the bar.

Podolski  7.  Lukas came on and nearly scored right away. A few minutes Stekelenburg parried a Lukas thunderbolt onto the upright. A good cameo.

Oxlade-Chamberlain 6.  Almost scored from a header late in the game and then conceded a sloppy foul on Berbatov near his own penalty area.