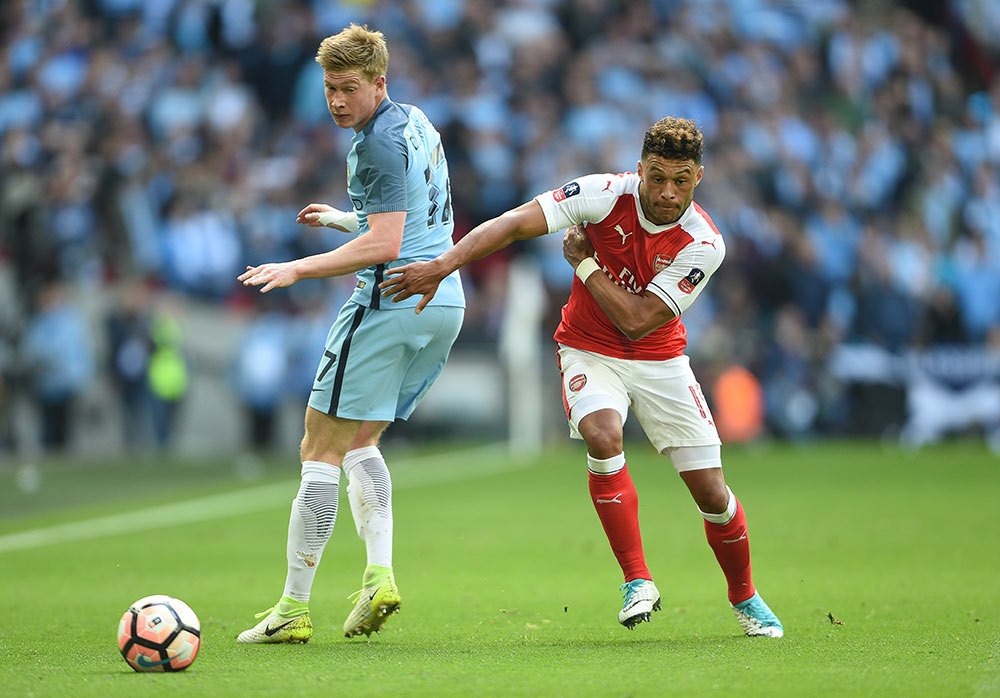 Man of the Match: Alex Oxlade-Chamberlain. The Ox came up big for Arsenal, being the biggest spark to the offence, providing the key assist of the match.

The Weak Link: Nobody. Everyone had a good match.

The Referee: Craig Pawson 7.  A generally decent match from the ref, although City will complain that the linesman shouldn’t have ruled Sane’s first half cross out that reached Aguero, who scored. Replays were not conclusive. Pawson also resisted giving City an early penalty and refused to give us penalties in extra-time. The game was a little testy at times, but Pawson just managed to keep a lid on things.

The Manager: 8. Wenger gambled on the new formation working and the players made it happen. The pressure on him for this match was immense.

Verdict: An inspirational come from behind victory by the Gunners, who worked together, fought together, and triumphed together. At times they were hanging on for dear life, witness the two times City hit the woodwork late in the match, but they gradually became stronger as the match wore on and were rewarded for their persistence.

Player Ratings:
Cech  8: I think he could have done better on the City goal as he started a little too deep in his goal. However, he made several great saves, particularly off Silva’s header and from Toure’s drive, which he just deflected onto the post.

Gabriel 8: Another fine performance from Gabriel, this time responsible for keeping an eye on Sane in particular. He made a number of key interventions. He also smacked Silva from behind and ended his match.

Koscielny 7: Laurent mopped up a number of times and kept the team focused. His header off the corner led to the winning goal.

Holding 7: He was steady at the back for the most part, only once conceding a corner when he had a lot of time. He almost won the game in extra-time when his header just went over the bar.

Monreal 8: Poor positioning allowed Aguero to score the opening goal, but Nacho scored the tying goal when he slammed home the Ox’s cross at the far post with his right (gasp!) foot. Probably the biggest goal of his career. He had a tough afternoon dealing with Navas and company, but he won’t forget this day.

Xhaka 7: Granit was solid through most of the match and kept the team ticking.

Oxlade-Chamberlain 9: His best match of the season saw him terrorize Gael Clichy and make a number of marauding runs and good crosses. At times he was the only one who looked dangerous. His assist was a big one and one we desperately needed. He was excellent on defence as well, helping Gabriel deal with Sane.

Ramsey 7: It was Ramsey’s poor turnover that led to the City goal, however he worked hard and made a number of tackles and interceptions. I did worry about his leaving the defence exposed as he looked to score in the latter stages of the match.

Ozil 7:  He had chances to score, but just missed, was just too gassed to finish off one breakaway, and was dumped in the area on another. He worked hard, but drifted in and out of the match. His set piece deliveries were very good.

Giroud 6: He battled hard, but had few opportunities other than the header he had off an Oxlade-Chamberlain cross.

Sanchez 8: He had a hard working performance, without too many highlights until he pounced in extra-time and reacted first to Welbeck’s miss and poked home the winning goal.

Welbeck 7: Could have been the goat of the match had we not won. He made an impact and had three golden chances. The first he smashed across the face of the goal and narrowly missed the top corner. Ramsey and Alexis had wanted him to pass. The second saw him header wide an Ozil cross and the third saw him miss a golden chance to score, barely making contact … only for Alexis to smash it home.

Coquelin n/a: Not on long enough.

Bellerin 6: A new crazy hairstyle. His first touch saw him give the ball away and put us in jeopardy. His third touch was a deflection on Delph’s drive that put it wide of the post.