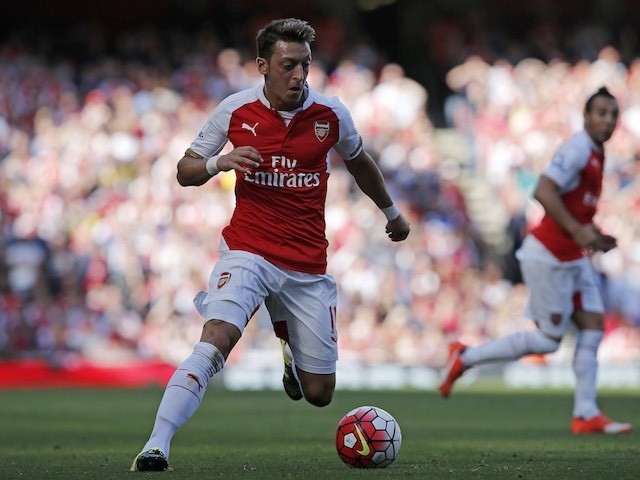 Arsenal’s form dropped off from this point on, but they still dominated possession and created chances, the best being Koscielny’s long drive which was well saved by Butland.

The opening goal came after a brief period of Stoke possession, where Coquelin made a super tackle and Ozil a fine through pass to Walcott, who finally managed to tuck the ball under Butland.

Arsenal continued to dominate the remainder of the half, but they couldn’t add to their lead.

Stoke became more aggressive in the second half and started to have more possession,  but never created any really dangerous chances.

Arsenal continued to be wasteful in front of goal. Theo Walcott spurned several golden opportunities, while Cazorla, Ozil, Ramsey and Sanchez had chances of their own.

Olivier Giroud replaced Walcott and immediately missed one of the best chances of the game, dragging his shot just wide.

Cech  7: He made a number of routine saves, as well as a solid challenge on a high free kick in the first half.

Bellerin  7:  A super cross in the first half deserved a better finish from Walcott. He was good throughout the match.

Gabriel  7:  Solid and aggressive through the match. Got into a skirmish with Arnautovic (the turd who ruined Debuchy’s season) that could have got him disciplined.

Koscielny  8:  A solid drive in the first half and a fine header late in the game would’ve been goals but for Jack Butland in the Stoke goal. Fine match by Laurent.

Monreal  7:  Like Bellerin, he provided constant support down the left and made a couple of good crosses and a one or two not so good crosses.

Coquelin 8:  His tackle led to the opening goal. He mopped up all over and was super in winning the ball back. He punted a good chance over the bar though.

Cazorla  8:  A good game from Santi. He set up the second goal, had a number of fine passes which various Gunners flubbed, and had a couple of chances to score himself.

Ozil  8:  Assisted on the opening goal, he was at the heart of the offence, pulling the strings. Was awarded a rather weak yellow card, which might explain a rather weak challenge in the second, which earned the ire of the fans. He had several shots as well, but needs to hammer the ball sometimes.

Ramsey 7:  A good game, but could’ve done better. Punted a good opportunity into the crowd rather than in the net in the first half. Work rate is always admirable.

Walcott  6:  Scored the opening goal, but should’ve had much more. He missed an easy header in the first half and had several chances in the second half where he seemed to lack conviction.

Sanchez  8: My man of the match, although players are on to him, crowding him when he cuts inside and blocking his shots. Still he hit the woodwork twice in the first half, the first the best, which was a header from a wonderful pass from Cazorla. His work rate is superb.

Giroud  7:  A terrible miss just after he entered the match was followed by an excellent header which sealed the match. He needed that.

Oxlade-Chamberlain 6: Some positive attacking from the Ox at the end. He drew the foul which set up the second goal.