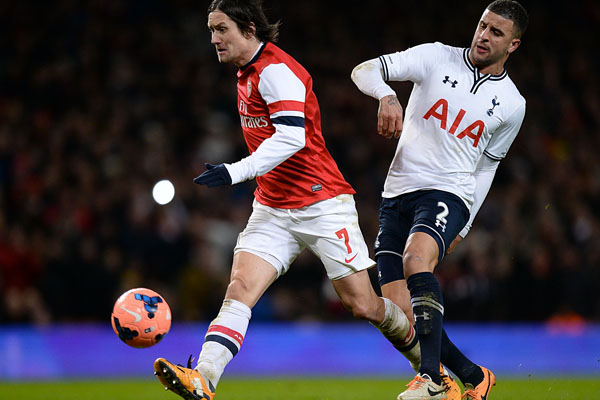 It was as if the knockout punch had already been delivered and Spurs had nothing left in the tank.

The first half was largely controlled by Arsenal, although Spurs looked threatening at times. However, they were able to seriously test Fabianski only once.

Arsenal looked dangerous throughout and finally scored when Serge Gnabry broke free and found Santi Cazorla with a lovely pass and the Spaniard buried it, hopefully his first of many goals this calendar year.

In the second half Arsenal continued to dominate. Theo Walcott remained a constant threat, but Arsenal could never quite provide the right pass to set him away.

The game was put to bed by Tomas Rosicky, who nicked the ball off Danny Rose and galloped straight at Lloris, lifting the ball over him and scoring the decisive goal.

At that point Spurs appeared beaten and they rarely offered any threat despite Walcott having to leave the field near the end and Arsenal having no more subs. It was a win to savour.

Fabianski  6.  Rarely threatened (most difficult save was from Ericksen in the first half) and looked comfortable throughout. His kicking, truth be told, was awful.

Sagna 7.  Kept his side of the field quiet.

Koscielny 7.  A couple of miscues early in the game, but he settled down and kept Spurs quiet.

Vermaelen 7.  Appears to have hurt himself as he missed the second half. Was solid, although was booked for a rash challenge early on.

Monreal 7.  A good game for Nacho, although he had his hands full dealing with Kyle Walker. Put Walker on the ground and might have conceded a penalty from a more hostile referee.

Arteta 7.  Helped to break up the Spurs attacks. Might have come off injured near the end.

Cazorla 8. A lovely goal. Cazorla was lively throughout and is rounding into form at the right time.

Wilshere 7.  Wilshere was on the receiving end of many physical challenges from the Spurs players. I’m sure it was intentional. He was a little untidy at the start of the game, but started playing well until he was substituted off.

Rosicky 9.  A great game for Tomas and one of my Men of the Match. He plays positively, plays aggressive defence, and quickens the pace of the team’s passing. His goal, richly deserved, was not easy but it showed his deft touch.

Gnabry 9.  The other man of the match. Almost everytime he touched the ball something good happened. Set up the first goal and contributed throughout. Are they really thinking about loaning him to Wigan?

Walcott 8.  Theo didn’t score, but he ran Spurs ragged. Unfortunately, it appears he has hurt his knee.

Mertesacker  8.  Dominated the air and kept Adebayor quiet in the second half.

Flamini 6.  Helped to shore up the defence at the end of the game.

Ozil  5.  Barely got involved in the game, although he gave the ball away late, providing Spurs with one of their only opportunities near the end of the game.