​Arsenal avoided potential further humiliation as they bounced back from a first-leg horror show to brush aside a meek Borisov side and progress to the Europa League round of 16.

Trailing 1-0 from their trip to Belarus, Pierre-Emerick Aubameyang's cross from the right was turned into the Borisov net by Zakhar Volkov to get Emery's Gunners off to the best possible start, and despite requiring a goal-line clearance from Stefan Lichtsteiner to deny the Belarus champions a surprise equaliser on the night, the football in the early stages all pointed to a pleasant evening for the Gunners. While not at their electric best against defensively resolute opposition scrapping for their first ever round of 16 place, Arsenal looked comfortable and assured throughout, and found themselves leading the tie for the first time when Shkodran Mustafi headed in a Granit Xhaka corner before the break.

Sokratis, with virtually his first touch of the ball after coming on as a substitute for Laurent Koscielny, nodded in another Xhaka corner after a howler from Scherbitski in the Borisov goal, and from there it was predictably plain sailing.

​Arsenal, you feel, had to win comfortably in order to restore some semblance of pride after that damaging defeat in Belarus a week ago.

With Mesut Ozil back in the starting lineup and Pierre-Emerick Aubameyang making a first Europa League start since October, they set up to do just that, and though the latter may have been forced by the red card picked up by Alexandre Lacazette in the first leg, they looked a rejuvenated side, and found themselves leading early on through slightly fortunate circumstances.

Made it into the ground 5 minutes late so missed the opening goal... thanks UEFA for the 17:55 kick off! #ARSBAT

They remained patient and in control throughout, despite a couple of defensive wobbles, and from the moment Mustafi headed in just as some frustrations were beginning to show, you couldn't help but feel the tie was only going one way.

All in all, it was a productive night for the Gunners, with plenty of positives to take forward; none more so than the return of Ozil to the first team fold, which should serve them well for the busy week or so they have coming up. Make no mistake, the German will have better games for Arsenal, but his re-emergence after a three game absence offered something they probably hadn't realise they'd missed in recent weeks.

The creative pivot he offered in front of Xhaka and Matteo Guendouzi brought something unique to the table, and while some ring-rust was evident, he didn't hide from the challenge and helped inspire his side to a much needed win.

Love the singing behind the stands at the Emirates even if it is WE GOT OZIL !! #arsenal #ARSBAT pic.twitter.com/OLOntBrK7H

Basically Ozil has been head and shoulders above the rest and it's nowhere near his best.

After missing his 101st game for the club last week, he still has a lot to do if he is to entirely redeem himself in the eyes of the Arsenal faithful, but a few more performances like this one, albeit against better opposition, and he'll be well on his way to doing just that. 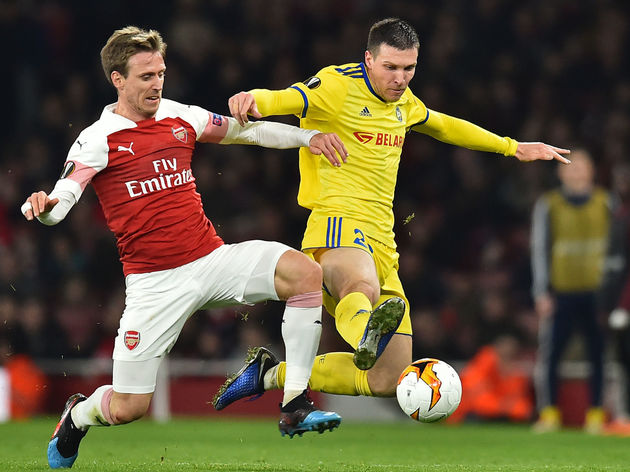 Arsenal have a busy week coming up, starting with Southampton at the weekend before hosting Bournemouth on Wednesday as they look to continue their pursuit of the top four with a couple of very winnable matches.

​They will find out who waits in the round of 16 when the draw takes place on Friday.