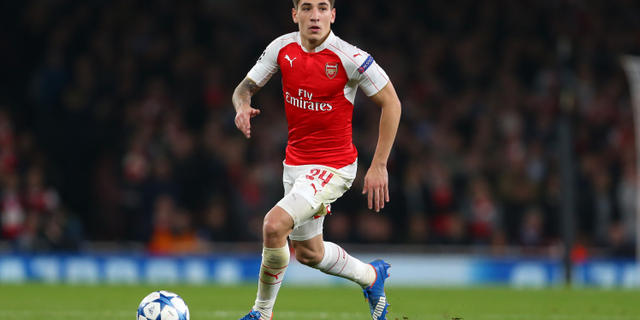 Arsene Wenger made significant changes to his midfield, opting to play Chambers, the Ox, and young Alex Iwobi as his midfield trio, resting Ramsey, Ozil, and Flamini.

The Gunners were slow out the box and only started to play after Sunderland scored, resulting from a Koscielny error.

Ten minutes after going a goal down they were even, courtesy of a fine cross from Theo Walcott and a clean strike from Joel Campbell.

In the second half Arsenal dominated, but Sunderland almost went ahead when Fletcher’s header hit the crossbar.

Hector Bellerin would make the difference as he made a number of marauding runs and created two goals, the first finished off by Ramsey, the second by Giroud.

From that point on Sunderland were beaten and Arsenal can now contemplate a midweek trip to Anfield.

Cech 7: Couldn’t be faulted on the goal, although he’ll feel he could have reacted better. Made one good save off Graham.

Bellerin 8: Man of the match. He had a few shaky moments on defence and was relatively quiet in the first half, but came on strong in the second half with a number of buccaneering style runs that produced two goals and should have produced another. His best match of the year.

Gabriel 7: A solid day at the office. Looked like he might have turned an ankle early in the game, but he managed to walk it off. Was beaten by Fletcher to a header that he put against the crossbar.

Koscielny 7: A nightmare was averted after Kos had his pocket picked by Lens, who shot past Cech. He was effective at bringing the ball upfield out of defence.

Gibbs 7: Solid game for Kieran, who was effective going forward and he kept Watmore under wraps. He had a chance to score early, but Pickford made a good save. In the second half he set up Walcott nicely, but he wasn’t able to make good contact with the ball.

Chambers 7: A decent game from Chambers. Arsenal controlled the midfield, so he did a good job. One or two of his passes were a little questionable.

Oxlade-Chamberlain 7: A strong second half which saw him hit the post (the fates seem to be against him scoring right now), involved in the buildup of the third goal, and almost setting up Walcott and Reine-Adelaide. In the first half he made several poor passes and looked to be forcing play.

Iwobi 8: A pleasant surprise. He got about, made some good plays, and he fitted right in. He had an early chance he created for himself with his quick feet. He was involved in the buildup for the first goal and he set up Campbell early in the second half.

Campbell 8: He was having a very quiet first half when he arrived at the right time to smack Walcott’s cross home, a difficult shot to make. He had a couple of chances to score in the second, but one he slid across the goal, the other was hit right at Pickford. Was involved in the buildup for the second goal with a sensational through pass for Bellerin.

Giroud 8: He had a quiet first half, but he was active in the second. Scored the third goal, sprinting onto Bellerin’s cross and tapping into the empty net. He should’ve been awarded a penalty when he was blatantly tripped, but referee Martin Atkinson for some reason said no. He had a sharp header saved by Pickford late in the game.

Walcott 8: Set up the first goal with a good run and cross. Moments later Pickford save a driving shot from Theo. Later he side footed Gibbs’s cross at Pickford, when he should have hammered it with his left foot. He set up Giroud to score, only for him to be tripped. A lot didn’t come off for Theo, but he was effective and looked dangerous.

Ramsey 8: Within minutes of coming on he scored, latching onto Bellerin’s pass. He had a good game.

Arteta 6: His first appearance in almost two months. Got some minutes under his belt.

Reine-Adelaide n/a: His debut. Was setup late by the Ox, but he couldn’t shoot in his stride and the chance was gone.