Both sides have shied away from goals of late and that was certainly reflected in the opening stages, where creativity and actual chances might as well have been mythical. Joelinton fluffed an effort following a corner and Pierre-Emerick Aubameyang fizzed one over from 25 yards, but it was not a first half for fans nor neutrals.

After the break it was a different matter, however - for ​Arsenal, at least. Eddie Nketiah spurned an excellent opportunity to give the Gunners the lead before a quickfire double from ​Aubameyang and Nicolas Pepé - the latter coming after a beautiful nutmeg and cross from Bukayo Saka on Lazaro - wrote the visitors out of the game before they knew what had hit them. ​Newcastle tried their hand at hitting back and Ciaran Clark shanked a glorious chance wide when it would have been easier to hit the target, before the electric Allan Saint-Maximin curled one off the far post. But it just wasn't to be for Steve Bruce's side who really lacked the invention required to do much damage.

Their fate was sealed when Martin Dubravka fumbled a tame Mesut Ozil effort over the line, before Alexandre Lacazette emerged from the bench to notch a fourth.

It's been a stale, indifferent start to life back at the Emirates for Mikel Arteta. On one hand, they hadn't lost a league game since losing to Chelsea on December 29th; on the other, they hadn't won one since beating Manchester United three days later. 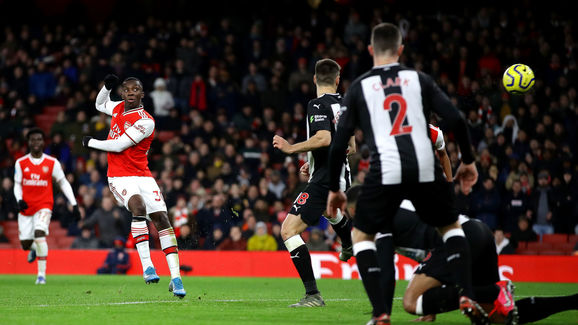 The sight of Bukayo Saka briefly leaving the field with injury would have had Gooners' hearts in their mouths, but the deputy left-back lasted the 90 minutes in what was perhaps his best performance yet in an Arsenal shirt.

Saka with an absolutely filthy nutmeg to create that goal!

What a talent we have... ✨ pic.twitter.com/aKXpnEzaF3

That goal was all about Saka. Fair play 

The fact he has taken to his new defensive role so smoothly is a credit to his attitude, and it's done little to limit his attacking contributions, as evidenced by his exemplary assist for Pepé that was taken straight out of the Thierry Henry playbook.

If it wasn't already abundantly clear that they need to secure his future, then it is now.

January signings Valentino Lazaro, Danny Rose and Nabil Bentaleb all started for Steve Bruce's side who were after a first ever Premier League win at the Emirates. Having not lost a game in eight heading in, in a season in which they continue to defy all expectations, they might have really fancied their chances against an Arsenal side there for the taking. It didn't quite play out that way, however. While the performance was by no means the worst even of this unexpectedly steady Steve Bruce era, their heads were left spinning by some of the attacking quality produced by the Gunners, as they had no answer to the pace and dynamism with which their hosts responded to an uninspiring first half.

In truth they seemed simply to be overpowered by a far superior side on the day, though their distinct lack of cutting edge was notable as they failed to put any substantial pressure on a Gunners back line that has been known to crumble.

For all Newcastle have impressed this season, you really wonder where they would be without the driving force of Allan Saint-Maximin on the left flank.

Saint-Maximin is what Arsenal fans think Pepe is

Streaker on the pitch. Hurtling around the Arsenal players at a speed only Saint-Maximin could match. Eventually wiped out.

The Frenchman seems to be getting better with time and though he had little in the way of substantial support, he consistently threatened to make things happen, his jinking run that took him past Hector Bellerin and Shkrodan Mustafi before rattling the far post summing up another strong - if ultimately fruitless - performance.

Arsenal will face Olympiacos in the Europa League on Thursday before returning to the Emirates to host Everton.

Newcastle, meanwhile, have six days to pick themselves up before they travel back to London to face Crystal Palace.