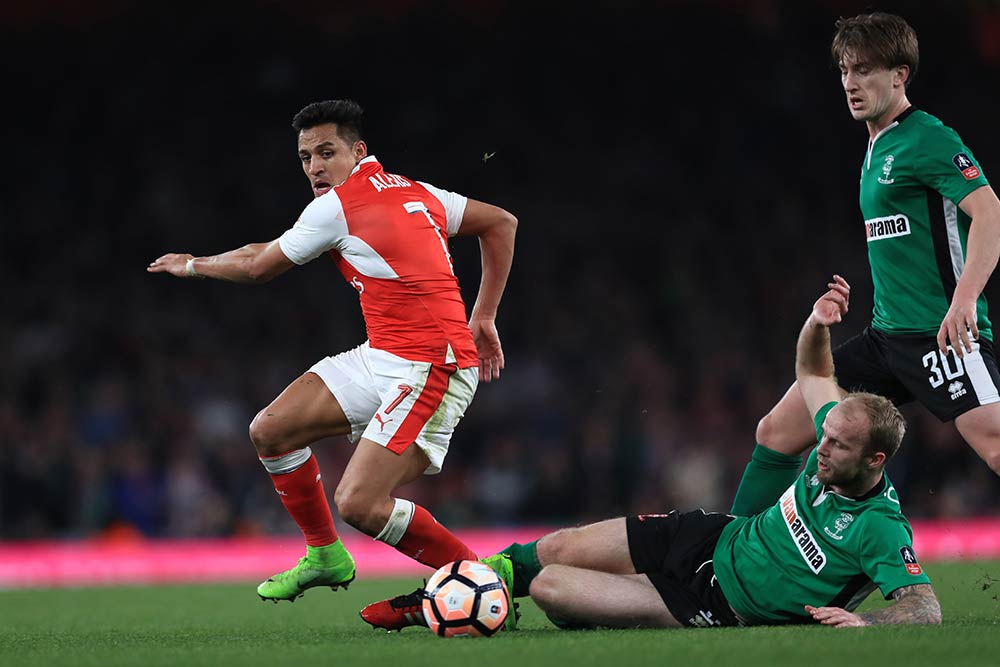 Man of the Match: Alexis Sanchez. Sanchez had a hand in most of the second half goals and at times was toying with the Imps.

The Weak Link: Nobody. Everyone had a good match.

The Referee: Anthony Taylor 6.  Anthony Taylor doesn’t like us for some reason and he always makes me nervous. I understand why the manager pulled Granit Xhaka from the match as Taylor would’ve found a reason to give a second yellow (in fact I was nervous the entire time Xhaka played after his yellow).

The Manager: 8. Wenger resisted putting in his second team squad and got a solid performance from the squad, which needed a win. This was a match that had a big banana peel lying in wait and the team avoided slipping up.

Verdict: Arsenal avoided the upset and now advance to the FA Cup semi-final. Hopefully this will kick start a revival in their form this spring.

Cech  8: Cech played in his first FA Cup match of the season, actually his first game outside the Premier League. He made a fine save in the first half off Arnold and from then on had little to do other than make one good save in the second half.

Bellerin 8:  Hector had a fine afternoon where he terrorized the Imps on the right flank. He even came inside and missed one good chance he took from the edge of the box. He got an assist on Giroud’s goal when he played a neat give and go with Sanchez in the buildup and then made the cross.

Mustafi 7: He made a few errant passes in the first half, but was largely untroubled throughout the match.

Gibbs 8: Like Bellerin, he dominated the left flank and was at the centre of much of the action. He had a good chance to score, but his header sailed over the top. He assisted on the opening goal and on the third goal, where his cross deflected off a defender who was trying to keep it from Ozil.

Xhaka 7: A strong display from Xhaka, but he picked up another careless yellow card.

Oxlade-Chamberlain 6:  Was having a decent match, but left in the first half with a hamstring injury. Whenever the Ox is starting to make a case for becoming a starter he gets injured. Tragic, as he has probably been our best player the past month.

Ramsey 7: A good match, but there is still some rust as he squandered several decent chances. Eventually he scored, when he sidestepped the keeper after collecting Alexis’s cross and he literally walked the ball into the net.

Walcott 8:  Theo probably should’ve had three goals in a solid display. He had Arsenal’s best chance early in the first half, but the keeper made an excellent save from Walcott’s venomous drive. He finally scored just before halftime when he reacted quickly to Gibb’s pass and poked the ball past the keeper. In the second half he came close to scoring a couple of times and crossed to Gibbs, but he couldn’t put the header home.

Giroud 7:  Scored the second goal, when he slotted home Bellerin’s cross. However he’d completely fluffed a cross seconds earlier and that seemed to mute his celebration somewhat. He battled hard against the Imps and had banged his head earlier in the match.

Sanchez 8: He had a very strong second half and was involved in most of the goals. He scored the fourth goal with a drive from 20 yards, after he sidestepped a wild challenge from an Imps defender. A free-kick hit the crossbar as well.

Ozil 8:  He had his best match in the past two months as he was heavily involved in the second half. He missed a header, was positioned to score on the third, but the defender poked it home first, and generally was buzzing around.

Coquelin 6: Helped to secure the midfield down the stretch.

Perez 6:  Lucas was involved right after he entered the match. He missed one decent chance and smashed a cross through the face of the goal.