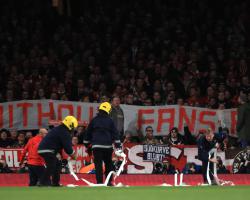 The Gunners were thrashed 5-1 by the Bundesliga giants, who ran riot during the second half once defender Laurent Koscielny had been shown a red card for bringing down Robert Lewandowski in the penalty area to complete a 10-2 aggregate victory.

Before the match, travelling Bayern fans held up a banner which read: "without fans football is not worth a penny" to highlight the cost of ticket prices and then once the action started toilet roll was thrown onto the pitch, which caused a delay as the debris was removed.

During the closing stages, there was also a brief disruption when a supporter ran on to the field and was eventually taken off by stewards after stumbling to the floor.

A statement from UEFA said: " Disciplinary proceedings have been opened following the UEFA Champions League round of 16 match between Arsenal FC and FC Bayern MÃÆÃÂ¼nchen (1-5), played on 7 March in England

16 (2) of the UEFA Disciplinary Regulations (DR)

"No other disciplinary cases have been opened after this match."

Both clubs could be hit with fines as a result.