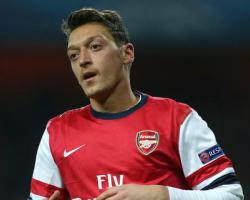 Arsene Wenger's side went into the weekend as leaders, but a chastening 5-1 defeat at Liverpool cost them top spot and raised serious doubts about their title credentials.

Arsenal's slip-up allowed Chelsea to take over at the summit and Jose Mourinho's team could pull four points clear if they win at West Bromwich Albion on Tuesday.

Arsenal play a day later when they host Manchester United, whose pursuit of a Champions League place received another setback on Sunday when they drew 2-2 at home to bottom club Fulham.

Arsenal manager Wenger has admitted that his side will have "questions to answer" on Wednesday, and midfielder Alex Oxlade-Chamberlain believes that United's visit represents an ideal opportunity to right some wrongs.

"We are very disappointed, especially with the first half," he told the Arsenal website

"We know we are better than that, so in that sense we are gutted.

"But these things happen in football and it is our responsibility to turn that around and we have a great opportunity on Wednesday night."

For all Mourinho's protestations that Chelsea are not genuine title contenders, they are now the favourites in the eyes of the British bookmakers following their 3-0 win at home to Newcastle United.

Eden Hazard confirmed his thrilling recent form with all three goals against Alan Pardew's side and he has admitted that he finds it hard not to think about the title.

"Top of the league

I hope at the end of the season it will be the same," the Belgian forward told Chelsea TV.

"It's a pleasure to play for this team and to work for that."

Chelsea needed a controversial injury-time penalty from Hazard to secure a 2-2 draw with West Brom in November's reverse fixture, but the Midlands club have slipped into the bottom three after winning only one of their subsequent 14 matches.

Unlike Chelsea, Manchester City failed to capitalise on Arsenal's capitulation at Liverpool, with a 0-0 draw at Norwich City leaving them two points off the pace in third place.

On Wednesday Manuel Pellegrini's side host Sunderland, in a dress rehearsal for next month's League Cup final.

Sunderland slid to within a point of the relegation zone after losing 2-0 at home to Hull City on Saturday, but City midfielder James Milner says that his side will need to be on their mettle nonetheless.

"You can see how tight the league is at the top and the bottom," he said.

"Everyone you play is scrapping for points and a win can mean a big difference in league position.

"We are at home and it will be a lot different to the cup final, but we need to bounce back from this and show we are ready to go again."

Liverpool's rout of Arsenal took them to within six points of top spot, but they are likely to regard Wednesday's trip to Fulham with a greater degree of circumspection after the London club's dogged display at United.

Fulham's draw at Old Trafford means that only seven points now separate the 10 teams in the bottom half of the table.

Cardiff City are a point off the bottom after losing 3-0 to local rivals Swansea City on Saturday, but with a home game against 12th-place Aston Villa on Tuesday, manager Ole Gunnar Solskjaer says that his players cannot afford to feel sorry for themselves.

"We knew we would be in a battle like this, considering this was a team that had come up for the first time in 51 years," said the Norwegian.

"But I've always said the Premier League is almost split into two different leagues, and we're in the second one.

"We have two home matches coming up against Aston Villa and Hull, two other teams in this second league with us

We need to look to win those and give everyone a boost."