Arsenal and Manchester United set to fall away in title race 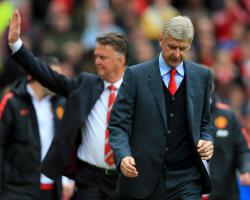 Arsenal, who have only added Cech to their squad have now fallen behind, as Chelsea and Manchester City showed they mean business again this Premiership term.

To be fair LvG has been very active in the transfer market, there is no doubt about that but their performances this season, despite two wins from two games, are still leaving fans worried that the right reinforcements are still needed.We know money is not everything and both the Gunners and United have extremely strong squads

They will have a strong say in the title race

You don't get anything for 'shoulda woulda coulda' in this game

The league never lies over the course of a season.

Anyway, basing predictions after just two games would be crazy

This season will see a real rollercoaster of surprises with a number of unfancied teams doing well, possibly even pushing for a European spot

Already Arsenal and Chelsea have lost games, Liverpool were extremely fortunate against AFC Bournemouth, Manchester United were lucky against Spurs

This is the beauty of the Premiership

Speculation is breaking today (20.8.15) that Arsenal have switched their attention to PSG's Cavani

The transfer merry-go-round of speculation and gossip never ends...