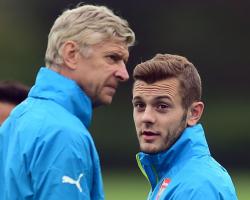 Midfielder Wilshere, 23, needs surgery to properly correct a hairline fracture in his left fibula, which will see a small plate inserted into the bone, and a rehabilitation time of around three months.

The news of the latest setback for the England international, who has battled through a string of fitness issues which have halted his progress in recent campaigns, overshadowed preparations for the opening Group F fixture at the Maksimir Stadium.

Dinamo have not lost in a formidable run of 41 matches, and last season they became the first team to go unbeaten through a Prva Liga campaign.

However, the Croatians have never previously qualified for the knock-out stages, and have endured a 15-game winless run in the competition proper.

Wenger believes Arsenal must show they have learnt lessons from the disappointing early exit last season at the hands of unfancied Monaco as they bid to go one better than when reaching the final a decade ago.

"This drive to win the Champions League is immense," said Wenger, who left midfielder Aaron Ramsey and full-back Hector Bellerin back in London, perhaps with one eye on Saturday's trip to Chelsea.

"It has never been done at Arsenal, we were very, very, very close (in 2006), but on the other hand, I am long enough in the job to know you have to be realistic and know that you put hard work in.

"This is a championship and after the cup competition starts if you get out of the championship, so let's focus on that first."

It is just a bone that did not heal well," he said.

''They need to put a little clip in

That is nothing major.

"I am not a specialist, but I think this was just an accident which was not linked with his ankles.

''We are still at the start of the season

We are now mid-September, so after three months - mid-December - he can be back

There is still a long way to play after."

When Wilshere eventually returns to first-team action, he could have well missed around 1,000 days of football in total.

Wenger, though, rejected suggestions that should be an ongoing concern.

"He is young enough to get over that and I hope his body will stabilise, I am confident he will and that he can make a career his talent deserves," he said.