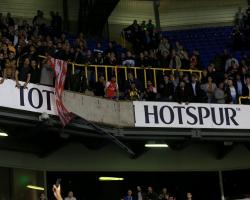 However, the celebrations were overshadowed by disturbances which saw a minority of the travelling supporters in the corner of the South Stand ripping down hoardings of Tottenham club slogans, with police and stewards forced to intervene

Arsenal are now working with both Tottenham and the authorities, with banning orders a likely outcome for any offenders.

Wenger was disappointed the incident had taken the shine off what was a positive response to a difficult spell following defeat at Dinamo Zagreb in the Champions League and also in a fiery clash at Stamford Bridge last weekend.

"We cooperate completely with the authorities to sort that out

We don't want any violence," said Wenger, who takes his side to Leicester on Saturday.

"I don't really know what happened but we are the disposal of the authorities to help them to sort it out."

Wenger feels the performance at White Hart Lane showed his squad, which saw several players rotated, have the needed character to get their campaign back on track.

He said: "It shows that we have a big squad at a very strong level and I have always considered that because I have confidence in every single player.

That shows I have great confidence in my players."

Alexis Sanchez has yet to find the net in his eight performances this season.

Wenger admits the Chile forward is working off a hangover from the summer's Copa America success and felt he perhaps should have been given more time to recover.

"I think I played him very early before he was completely fit, physically, that is one explanation," said Wenger.

These are the two main explanations for me.

"Physically he is not completely ready, coming out of a big achievement and that takes time.

"I don't worry for Alexis Sanchez

Even when he doesn't score he is still a major threat for everybody and I am confident he will score very soon."

Arsenal will have midfielder Santi Cazorla back from a one-match suspension after his red card at Chelsea, but must wait on an appeal against an improper conduct charge for defender Gabriel following the fall-out from his clash with Diego Costa.

Wenger said: "He was sorry for what happened and very disappointed, but he is a fighter and his attitude in training the whole week was completely focused and motivated.

Midfielder Francis Coquelin is recovering from a minor knee problem, while Wenger revealed Jack Wilshere's operation to help heal a hairline fracture in his fibula went well and the England international could be back around Christmas.

Leicester are a place above Arsenal in fourth, having impressed with an unbeaten start to the campaign under new boss Claudio Ranieri.

Wenger believes the Italian is a welcome addition back to the Premier League following his work at Stamford Bridge from 2000 to May 2004.

"He built the (Chelsea) team that was so successful at the start," the Gunners boss said.

"I remember them finishing second in the league with Ranieri and the team was upcoming with young players like John Terry and Frank Lampard, who were the players that contributed to the success of Chelsea."