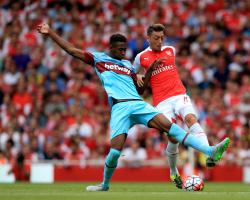 Oxford was given his first start against Arsenal on the opening day of the season by Slaven Bilic and since his debut the 16-year-old made six appearances for the Hammers in all competitions.

"Reece can become a West Ham legend and that is what this place needs,Ãâ he told The Independent.

"We need a catalyst to change it

That is why the determination to keep him at 16 was so great.

As a club we already had the player

Manchester City, Chelsea, Arsenal wanted him and the value was ridiculous.

You havenÃât got a choice."

West Ham academy director Terry Westley said "every single one of our 175 boys from nine years old to 22 has his own individual plan.

ÃâI say to Oxford, that heÃâs going to be a Premier League footballer

When he plays in the Euros he stands out.

"You go to the theatre to see Billy Elliott

The actor is what, 13? He canÃât make a mistake

He canÃât trip over or get his words wrong

We tend to allow it and think it is OK