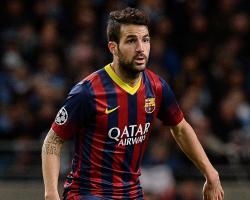 Manager Arsene Wenger is determined to bolster his FA Cup-winning squad to mount a sustained assault on the Barclays Premier League crown next season, having fallen off the pace behind Manchester City, Liverpool and Chelsea before finding form ahead of their Wembley victory on May 17.

The Gunners have been linked with several players across Europe, including former captain Cesc Fabregas, who is reportedly set to leave Barcelona this summer

Arsenal are understood to have an option on the Spain midfielder, also a target for Chelsea and Manchester United.

Toulouse right-back Serge Aurier has been touted as a potential replacement for the out-of-contract Bacary Sagna, while Real Madrid's Spain Under-21 forward Alvaro Morata is another reported to be on Wenger's radar along with Inter Milan's former Manchester City frontman Mario Balotelli

While not being drawn on any specific targets when quizzed at an Arsenal supporters' question and answer session on Wednesday night, Gazidis insists there are movements behind the scenes to get deals done

"Transfers are obviously important and we are deep in conversations already

I am confident we will add what we need this summer," he said.

"The manager is not scared to spend, has the experience, but as always will have to juggle a set budget.

"We are all really pleased with securing Champions League qualification again

Last season was a great experience for players to win the FA Cup and now we want more."

He has given us the footballing philosophy we have now.

"Arsene's legacy is based on him wanting to take Arsenal to the next level, and everything he did and still does is for the future of the club."