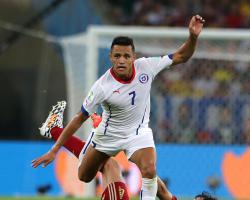 Sanchez is understood to have instructed his representatives to close negotiations with the Gunners after deciding against offers from both Liverpool and Juventus.

Reports in Spain suggest Barcelona have accepted Sanchez's desire to leave and head to London rather than Anfield, where he could have been used as a makeweight in a potential deal for Luis Suarez.

Some of the Arsenal squad, including Wales midfielder Aaron Ramsey and goalkeeper Wojciech Szczesny, had their first pre-season fitness training session at London Colney on Tuesday afternoon, under the watchful eye of assistant manager Steve Bould, with Arsene Wenger still out at the World Cup on media duty for French TV.

Carl Jenkinson was another put through his paces, and the right-back is expected to face competition for a starting place from Debuchy next season with the France international set to finalise the formalities of his Â£10million switch from Newcastle in the coming days, with suggestions a medical has already been completed.

There was positive news from the Gunners camp on Tuesday as Abou Diaby, a long-term injury absentee last season, was able to take part in the fitness sessions and could yet prove an asset for Wenger next season.

Arsenal's players will return to pre-season training on a staggered basis following the World Cup - with German trio Per Mertesacker, Mesut Ozil and Lukas Podolski all out in Brazil for the duration.

Despite Wenger not being on site, Arsenal have remained busy in their summer recruitment drive.

Defensive cover is needed following the departure of Bacary Sagna to Manchester City on a free transfer after lifting the FA Cup at Wembley, while goalkeeper Lukasz Fabianski has joined Swansea.

The signing of Sanchez, though, would present another major move by the Gunners, who smashed their transfer record at the end of last year's summer window to bring in Ozil from Real Madrid.

A defensive midfielder is also said to be on Wenger's wanted list, with Lars Bender at Bayer Leverkusen a long-term target.

Arsenal also released several players at the end of their contracts, including Nicklas Bendtner.

The Denmark forward has several options, reported to be both from within the Premier League as well as European sides.

Arsenal step up their pre-season schedule in New York at the end of the month ahead of hosting the Emirates Cup and the FA Community Shield against Manchester City at Wembley on August 10.