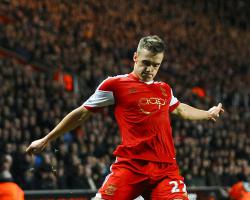 Chambers, 19, continues the exodus of players from St Mary's after agreeing a "long-term" contract with the Gunners.

I'm sure he will do well with us," Arsenal manager Arsene Wenger told the club's official website.

Chambers, who can also play at centre-back, accumulated 22 appearances for Saints last season after making his Premier League debut on the opening day of the campaign

"We are very pleased that Calum has agreed to join us," Wenger said

"The way he adapted to the Premier League last season with Southampton at a young age shows that he has tremendous quality."

"I'm so happy to be signing for Arsenal," Chambers said

"I would like to take this opportunity to say thank you to everyone at Southampton for everything they have done for me and for making this move possible."