​Arsenal have confirmed that Hector Bellerin has ruptured the anterior cruciate ligament of his left knee and will undergo surgery in the coming days, ruling him out for the rest of the season.

Bellerin was stretchered off to be replaced Mohamed Elneny in the 69th minute of Arsenal's 2-0 win over Chelsea on Saturday, with Unai Emery admitting afterwards that 'the first impression is not positive'.

Sure enough, ​Arsenal have now confirmed via their ​official website that Bellerin will require surgery followed by a rehabilitation process of six to nine months, meaning that he may even miss the start of the 2019/20 season.

With Arsenal limited to loan deals only this month, Emery's hands are tied when it comes to getting a replacement in, though he insisted after Saturday's game that there are plenty of options available to cover for Bellerin.

"We have Ainsley [Maitland-Niles] who is playing well. He can help us playing as a right back or right winger. And we have [Stephan] Lichtsteiner. We have players. And don’t forget [Carl] Jenkinson," said the Arsenal manager.

Bellerin's injury adds to Arsenal's defensive woes, with centre back Rob Holding already ruled out for the rest of the season after suffering a similar injury against Manchester United in December. 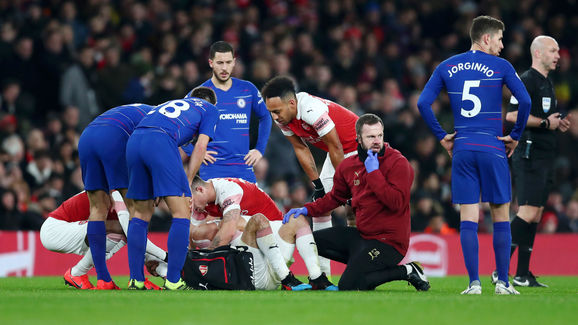 Danny Welbeck is the other long-term absence with which Emery has to contend as he tries to steer Arsenal to a Champions League place this season.

The Gunners closed the gap on the top four to three points by beating Chelsea, although Manchester United are breathing down their necks.