Arsenal Contract Review: When Every Player's Current Deal Is Due to Expire

Last summer Arsenal chief Raul Sanllehi made a vow to prevent the club having players needlessly run down their contracts and depart north London for nothing.

Aaron Ramsey, Alexis Sanchez and Mesut Ozil were three of the most high-profile cases of recent windows, with only the latter opting to eventually stay on at the club and not jet off for pastures new.

However, Contractually there are some uncertainties at Arsenal at the moment, with the futures of some of the club's key stars still up in the air.

Here’s a full review of the current expiry dates of every first-team player, selected youngsters and those out on loan*. ​This summer isn't cause for concern just yet with no key players at the club set to leave as a direct result of their contracts expiring.

Goalkeeper Matt Macey has been with Arsenal since 2013 but has made just two senior appearances at the club, and is likely to be moved on.

In the loan department there is Real Madrid's Dani Ceballos, who has shone in spells for the Gunners, but his season-long stint in north London is due to finish in June and, at present, an extension, or indeed a permanent transfer, seems unlikely. Some big names are due to depart the club in the summer of 2021, with the name most heavily linked away from the club among them. Indeed, ​Pierre-Emerick Aubameyang has been linked with a move abroad after seemingly growing tired of Europa League football, meanwhile ​Mesut Ozil, now 31, is unlikely to be offered an extension. Having paid a then-club record fee for ​Alexandre Lacazette, the Frenchman has endeared himself to the Arsenal faithful to the point of earning the club's Player of the Season award last campaign. Yet, he too has been linked away in recent windows.

Matteo Guendouzi is one for the future and is expected to be at the club long-term, whereas Sead Kolasinac will face competition in the left-back slot when Kieran Tierney returns from injury, potentially prompting an exit. A pair of goalkeepers have their contracts expiring in 2022, with it unlikely both will stay on. 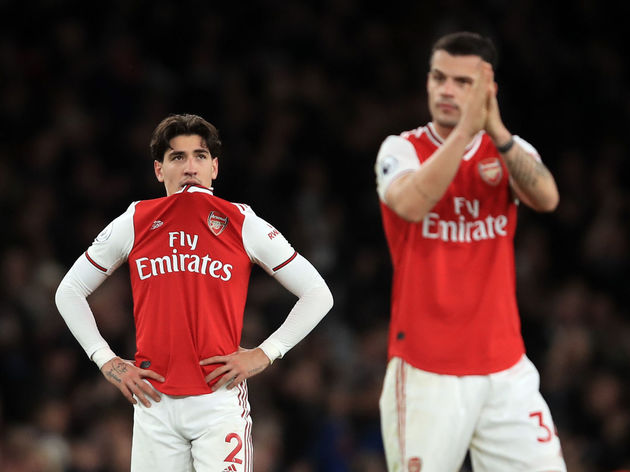 A whole host of players signed long-term deals recently, with plenty tied down to the club for the foreseeable future - which was Sanllehi's plan when the new structure was put in place. Three young English talents feature on this list and both first-choice central midfielders under Mikel Arteta are also contracted for a few more seasons, a pleasing aspect for the Spaniard who rates Granit Xhaka and Lucas Torreira highly.

The club have shown faith in Hector Bellerin too, who is still expected to be a part of the club's future despite his injury record. A trio of acquisitions were made during the summer with a view to playing a long-term part in the Gunners' future. Kieran Tierney's move from Celtic dragged out for a couple of months, but the club see him as the undisputed left-back, hence the lengthy deal.

It is a similar situation for Nicolas Pepe, the club's record-signing, as well as Gabriel Martinelli. The 18-year-old Brazilian has taken like a duck to water in the ​Premier League and is highly-rated at the club. ​