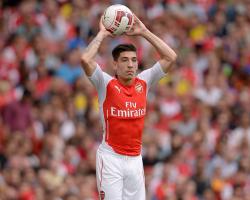 Monreal failed to travel to Germany because of a back problem while Chambers has succumbed to tonsillitis and will be assessed again on Tuesday morning.

It potentially leaves Arsenal without three full-backs as Mathieu Debuchy, who was already suspended for the Group D opener, faces an extended spell on the sidelines because of an ankle problem.

Chambers had been earmarked to replace Debuchy but should he fail to recover, 19-year-old Spaniard Hector Bellerin will add to his solitary senior appearance for the Gunners.

Kieran Gibbs will start at left-back in place of Monreal.

"In defence we are....the Debuchy injury has put us in a position where we don't want more injuries," Wenger said.

"We have Bellerin who I think is now ready to play

He's a boy with personality who isn't fazed by the pressure.

His transition game is fantastic

He's very quick and his final ball is good as well

"He lacks a bit of experience as a defender, but he's very dangerous going forward."

Wenger's refusal to add to his defence during the summer - he signed Chambers but sold Thomas Vermaelen - may now come back to haunt him with Debuchy facing an extended spell in the treatment room.

The Frenchman was stretchered off with ligament damage in Saturday's 2-2 draw with Manchester City at the Emirates Stadium and reports state he could be missing for up to three months.

"Debuchy is out for a longer period

We don't know how long yet

We hoped to have good news after his scan today (Monday)," Wenger said.

Arsenal keeper Wojciech Szczesny is disappointed by the loss of Debuchy, but is happy to play behind a rejigged defence.

"It's very disappointing to lose such an important player," Szczesny said.

Hopefully he'll be back as soon as possible.

"It doesn't matter which defenders play in front of me because we're used to communicating in training, so it's not an issue."

Wenger insists any benefit of arriving in Dortmund with three German internationals in Arsenal's squad - Per Mertesacker, Mesut Ozil and Lukas Podolski - is offset by the familiarity between the club rivals.

It is the third time in four seasons they have clashed and Wenger said: "It's not such an advantage to have three German players in the squad because we know Dortmund anyway

We play them each year!

Look at the number of times Bayern Munich have been in the final.

"There's no obvious reason why suddenly they shouldn't be there.

"Dortmund is a regular participator as well and in Spain you have the two big clubs - Barcelona and Real Madrid will be contenders again.

"We had a very physical game against Man City on Saturday so it will be tough for us.

"But we have recovered well and sometimes in the second game you can be even stronger."