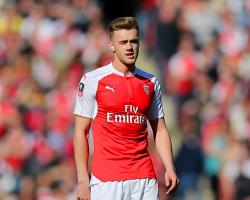 The versatile 21-year-old is expected to spend the rest of the season at the Riverside Stadium after struggling to command a regular first-team place with the Gunners.

Chambers is heading north for a medical with manager Aitor Karanka keen to further strengthen his defensive ranks after a positive start to the Premier League campaign.

Promoted Boro are unbeaten in the league after three games and secured their first top-flight win for seven years at Sunderland on August 21.