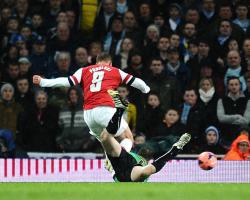 The Sky Bet League One side were never given a chance to think about causing an upset as a first-half double from Lukas Podolski put the Gunners in control of the tie, with substitutes Olivier Giroud and Santi Cazorla adding further strikes in the closing stages.

Wenger, who handed a senior debut to 16-year-old midfield prospect Gedion Zelalem - not even born when he first took charge at Highbury - will now regroup his squad for next week's Premier League trip to Southampton on Tuesday having brushed past their opponents without really getting out of second gear.

Arsenal showed their intentions from kick-off as Jack Wilshere and Lukas Podolski both went close, before the Gunners swept into the lead on 15 minutes when the German forward rounded goalkeeper Joe Murphy to score from a tight angle.

Coventry captain Carl Baker forced a good save from Arsenal number two Lukasz Fabianski before Podolski headed in a second at the far post from a corner.

The 5,000 Sky Blues fans held up banners protesting against their move of 'home' matches down to Northampton before a part floodlight failure saw supporters across the Emirates Stadium use their smart phones as torches.

Coventry forward Leon Clarke - who has handed in a transfer request - was put clear into the Arsenal penalty area at the start of the second half, but his shot at the near post was saved by the feet of Fabianski and he then fired wide having been set up 18 yards out.

There was a brief stoppage when a Coventry fan came on to the pitch, wearing a T-shirt which read "Sisu Out" in protest against the club's owners.

The tempo of the match dropped during the closing stages, which saw main striker Giroud net his 13th goal of the season from close range before Cazorla - whose double sank Fulham last weekend - crashed in a fourth in the 89th minute.

The Heavens had opened just in time for kick-off - but the elements failed to delay Arsenal's onslaught as the home side forced a succession of corners.

Wilshere drilled a low shot wide from the edge of the penalty area before Podolski scooped the ball over as it was sent through the six-yard box by right-back Carl Jenkinson.

Ozil played Podolski in on the left side of the area and the German international rounded the keeper before slotting the ball back into the net from a tight angle.

However, rather than just roll over, the Sky Blues went straight on the offensive as a positive run from midfielder Baker finished with a stinging 20-yard effort which Fabianski tipped over.

Any hopes of a comeback, though, were soon extinguished when Per Mertesacker flicked on a corner which was headed in at the far post by Podolski on 27 minutes.

There was a protest from the 5,000-strong travelling support on 31 minutes, with placards held up asking 'Why?' the Midlands club had been forced to move 'home' matches 31 miles down the M1 to Northampton, with the Arsenal supporters giving their own applause to show solidarity as chants of "we want to go home, back to the Ricoh" rang out in the Clock End.

Podolski was inches away from converting his hat-trick as he collected Jenkinson's cross and turned to fire the ball just over.

There was some concern after Wilshere picked up a knock to his ankle in a 50/50 with Cyrus Christie, but the England midfielder was able to continue.

As half-time approached, some of the floodlights went out, which led to thousands of smart phones being waved around the stadium.

The lights were on again for the restart and Coventry had a great chance to get back into the tie as Clarke was sent clear into the right side of the Arsenal box.

However, the want-away forward - linked with a switch to League One rivals Wolves - saw his angled shot blocked at the near post.

Alex Oxlade-Chamberlain felt he should have been given a penalty when pushed over by Christie, but referee Robert Madley was unimpressed.

Clarke should have hit the target when picked out on the edge of the Arsenal penalty area by Franck Moussa, but flashed the ball wide.

On 61 minutes another protest from the Coventry supporters followed, this time with "When?" placards, while singing the 'Sky Blues Song' which was written by Jimmy Hill, who became their manager in 1961.

Bizarrely no stewards move to intercept the Coventry fan who then came on to the pitch, and it took the intervention of a couple of Sky Blues players to help usher him off.

With 20 minutes left, Denmark forward Nicklas Bendtner, fit again from an ankle problem, was replaced by Santi Cazorla and Oxlade-Chamberlain came off as German-Ethiopian midfielder Zelalem - who spent some time growing up in the United States and turns 17 on Sunday - made his senior Arsenal bow.

Giroud was sent on for the closing stages and needed no second invitation to sweep home a low cross from Kieran Gibbs as he made it 3-0 on 84 minutes.

Cazorla rounded off the game by slotting in a fourth after Jenkinson's angled shot was saved by Murphy.