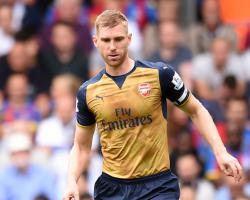 And manager Arsene Wenger has revealed that Mertesacker, battling a chest infection, and Koscielny, sidelined with a back injury, are both doubts for the lunchtime kick-off at St James' Park.

"I don't know," said Wenger when asked if both players would be available for the trip to Newcastle.

The less likely to be fit is Mertesacker.

"I would like them to be available but that's part of the season, and you can't complain about that."

Calum Chambers and Gabriel formed a makeshift partnership for Arsenal against Liverpool, but both players endured a testing opening period and the Gunners were fortunate to head into the interval with the score still level.

"It was a game of two halves for us defensively," Wenger added

"In the first half we gave the chances away to Liverpool to score and in both halves we created chances.

Defensively we suffered in the first half but in the second half we didn't give any chances away."

Wenger's side also failed to score in three of their final four games at the Emirates Stadium last term.

The Frenchman is on the lookout for a new striker before the transfer window closes on Tuesday, with Real Madrid's Karim Benzema and Edinson Cavani, of Paris St Germain, both reported targets, but Wenger admits he is not close to finalising a deal for any player.

"I am always confident that a last-minute situation or solution is available, because the transfer market is especially moving in the last four or five days," said Wenger.

"But at the moment I cannot promise you that

We work very hard, you know I have a team around me who work day and night to find good solutions but at the moment we are not close to signing anyone.

"Finishing qualities come and go and you do not always know why, but certainly at the moment we want it so much at home that we're trying to force it a little bit."