Arsenal defender Hector Bellerin may not play again this season after suffering a suspected anterior cruciate ligament injury in the Gunners' win over Chelsea on Saturday.

Bellerin was stretchered off to be replaced Mohamed Elneny in the 72nd minute of the match at the Emirates Stadium, and Arsenal are nervously awaiting an MRI scan to determine the severity of the injury.

The ​Daily Mail reports that ​Arsenal staff are pessimistic about the situation and are expecting the scan to confirm their first suspicions, which would rule him out for the rest of the season. 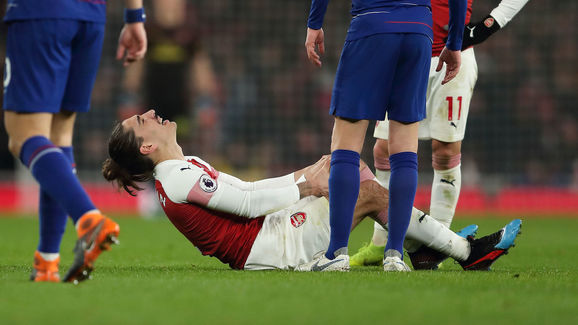 There is a possibility that Bellerin has only damaged his meniscus, but even that would result in a lengthy spell on the sidelines.

Speaking after Saturday's game, Arsenal manager Unai Emery admitted that things did not look good for Bellerin, but assured fans that he had enough cover to see them through.

"We have to wait," said Emery. 'We will learn Sunday or Monday, but the first impression is not positive.

"We have Ainsley [Maitland-Niles] who is playing well. He can help us playing as a right back or right winger. And we have [Stephan] Lichtsteiner. We have players. And don’t forget [Carl] Jenkinson."

Bellerin's injury adds to Arsenal's defensive worries, with Rob Holding already ruled out for the rest of the season after picking up a knee ligament injury against Manchester United in December.

Arsenal may dip into the transfer market for reinforcements, but they are only capable of making loan signings this month.