​Arsenal defender Hector Bellerin has had successful surgery to repair an anterior cruciate ligament (ACL) injury in his left knee, the club has confirmed.

Bellerin was stretchered off in the 72nd minute of Arsenal's victory over Chelsea on 19 January, and it was confirmed three days later that he had ruptured his ACL and would be sidelined for between six and nine months.

In an injury update ahead of Sunday's trip to Manchester City, ​Arsenal confirmed via their ​official website that Bellerin had undergone successful surgery in Spain on Wednesday.

Surgery = success. Big thank you to all the doctors and physios who worked so hard to get me ready for surgery and through it with such ease  pic.twitter.com/Jl8oNUptCB

He will now begin a recovery and rehabilitation programme in an effort to be fit for the start of the 2019/20 season.

In other team news, Laurent Koscielny has returned to training after sustaining bruising and soft tissue swelling to his face and jaw in last Friday's FA Cup defeat to Manchester United.

It was feared that the French defender might have suffered a broken jaw after taking an accidental boot to the face from Romelu Lukaku, but the reality is less serious and he could feature at the Etihad Stadium. 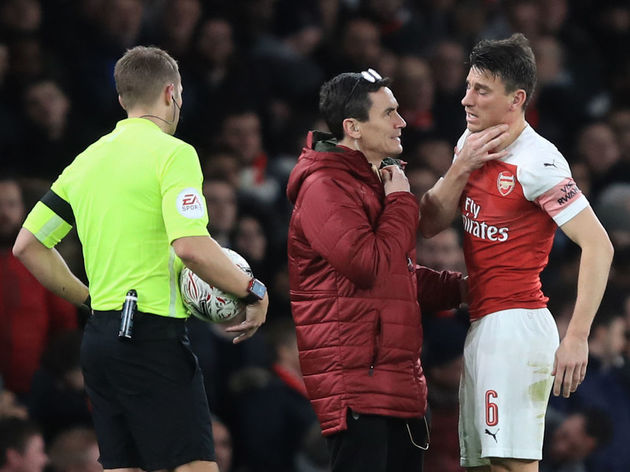 Sokratis Papastathopoulos, who was also forced off against United after landing awkwardly on his ankle, is expected to return to full training by the end of February.

​Henrikh Mkhitaryan is being assessed ahead of this weekend's match as he nears a return from the metatarsal injury which has kept him sidelined since mid-December.

Ainsley Maitland-Niles, who missed Tuesday's match against Cardiff with a right knee problem, is also being assessed.