Arsenal given boost in hunt for young midfielder 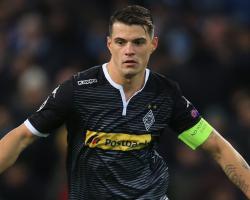 The 23-year-old midfielder is already an established member of the Switzerland international squad with 39 senior caps since making his debut in 2011 as well as caps from U17 U21 level.

Xhaka moved from Basel to the Bundesliga club Borussia Monchengladbach in 2012 for a reported fee of 8.5million euros.

With the Bundesliga player's stocks rising it seems that Max Eberl is resigned to loosing the player, saying to German publication Bild.

ÃâIt also depends on the numbers [the amount being offered by clubs], which can go into levels that make you dizzy.Ãâ

As a defensive midfielder you can see why Wenger would be willing to spend big being him to the Emirates as he would provide a midfield ball-winner and cover for a defence often exposed.

The player was named the best talent in Switzerland by the former Basel coach when he said.

"Xherdan Shaqiri is the best talent in Switzerland...after Granit Xhaka.Ãâ