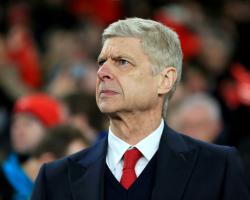 The Gunners go into the weekend two points off the top of the Barclays Premier League and travel to face long-term adversaries Manchester United on Sunday afternoon.

Wenger saw his side blow the Red Devils apart with a scintillating start to their meeting at the Emirates Stadium in October - scoring all three goals in their 3-0 win inside the opening 19 minutes.

But, with six goals in their last eight games in all competitions, such a performance has not looked close to materialising of late.

In the last week, Wenger has seen his side held to a 0-0 draw by Sky Bet Championship side Hull in the FA Cup fifth round and then lose 2-0 to Barcelona in their Champions League last-16 clash on Tuesday night.

They go to Old Trafford having won their last league game in the dying embers of a clash with leaders Leicester, with former United forward Danny Welbeck grabbing the injury-time winner.

Wenger will be hoping his return can add more goals to a faltering frontline having admitted he is concerned by Arsenal's form in front of goal.

"That's a good question - and it's a bad answer," he replied when asked why his team had stopped scoring.

"If I had an obvious answer...

It's going through my head at the moment

I'm conscious of that.

"There's many aspects that I analyse at the moment and we have to find a quick answer."

The 3-0 victory in north London on October 4 has been hailed by Wenger as their best result of the campaign so far - despite also beating Manchester City and Bayern Munich at the Emirates Stadium.

"We had a good performance against (United)," he said.

We need to play at that pace again.

"We had some good results at the Emirates, we beat City, we beat Bayern and United but it was maybe one of our best.

You expect always a good performance."

The two sides meet with United struggling to make the top four, but this fixture used to be a perennial title decider.

In two of Arsenal's three Premier League title-winning seasons they collected big wins at United, even wrapping up the championship there in 2002.

While Wenger does not want to look back at those previous successes, he admits winning at the home of the 20-time league champions has always been a big milestone.

"No I don't want to focus on that," he said when asked about Arsenal's win at Old Trafford in 1998.

"I'm more focused to recover from our defeat on Tuesday and prepare in the best possible conditions.

"I never look back, what is important is to go until the end and to win it and we know that to have the chance to do that we need to turn up with a strong performance on Sunday

Celebrations are far from my mind at the moment."